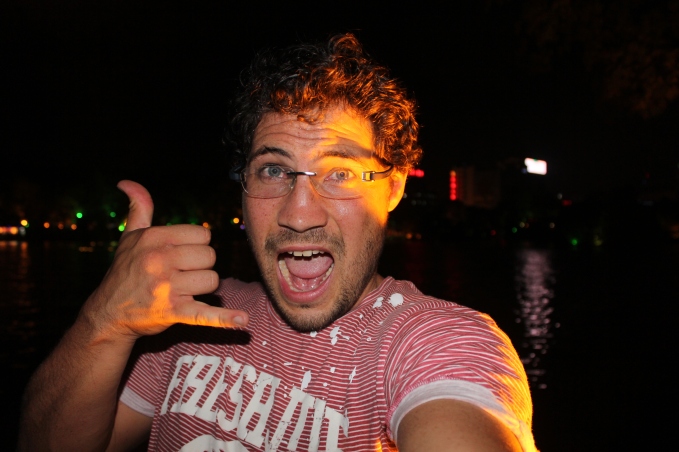 After three days in Guilin that were as sweet as the contents of a fat kid’s lunch box, it was time to jump on a plane and fly over to Hong Kong.

With a mid-afternoon flight, there wasn’t a lot of time to do anything special, so I took one last walk around Guilin and had a terrific lunch of fried chicken on a stick, beef on a stick, and something else on a stick. When I asked the dude behind the counter what it was he made a roaring sound, which could’ve been a dog, a cat, or an elderly person taking their last breath. Old person or not, it was delicious.

But the real action came on the taxi ride out to the airport. There’s no delicate way to put this – I saw a bloke fucking a dog. Right there by the side of the road, like it was the most normal thing in the world (hell, this is China, maybe it is). Don’t worry, though, the dog looked like it was having the time of its life, and old mate seemed to be a good sport because he have me a wave and a big smile as I went past. I waved back, and then he continued fucking Fido and I continued on my way.

My China Southern flight was chockers with geriatric Seppos, who gave me the shits with their constant talking and stupid jokes and colourful shirts and Americanness. Luckily, the flight was only an hour or so, so I was able to escape Air Fuckwit and make my way into Honkers.

The train ride from the aiport is a great introduction to the place, as the ultra-modern rattler zooms between gigantic glass buildings, through mountains and over beautiful blue waterways. It’s such a modern and exotic city, and once the train stopped off at Tsim Sha Tsui, I was overwhelmed by the hectic pace of the town, with people and taxis zooming this way and that while neon signs flashed above.

It’s a fantastic place to visit, but also busy and noisy and full of people trying to sell you shit or rip you off, which makes it the opposite of the sorta place I like spending my time. I took my camera out to take some snaps of the signs and tidal waves of people, got lost, didn’t drink beer ‘cos I don’t know if you can do that in the streets. Despite the number of people of the Asian persuasion, it’s a very, very western city – it was hard to get used to being able to walk across a street on a green light without having cars or bikes race through anyway – but also a bit stale and lifeless. It’s sort of how I felt about Las Vegas – lots of lights and action, but that’s only a facade. I think you’d really have to live in this place to get a proper feel for it, and to truly understand what Hong Kong is about

It’s also quite annoying to actually walk anywhere. Every five metres is a woman offering a massage, or a seedy Indian chap offering fake Rolexes, tailoring or weed. It’s really just a den of rip-offs, and makes a walk through Patong seem tame. There’s also not much of a street food culture here, with barely any nibblies available without going into a restaurant and paying Aussie prices. Of course, if I’d wandered out of the main part of Kowloon and visited some of the side streets, I would’ve probably found all sorts of amazing animals being fried in the gutters, but doing so would bring the risk of a stabbing, so I ended up grabbing a sandwich and some chips from a 7 Eleven and heading back to my room.

My trip through China has been incredible. I’ve seen amazing things, met wonderful people, and been challenged in a lot of ways, but it certainly hasn’t been a relaxing holiday. I’m a pretty simple dude – gimme a day at the beach and a good book and I’m happy. Chuck in a 49kg 19-year-old in a bikini and I’m grinning like a priest with a 12-month subscription to smallboyswithnoclotheshavingsexwithmendressedasclowns.com. In that way, trekking through some of the biggest cities in the world, and a ‘village’ bigger than Sydney, hasn’t been the best fit and has left me feeling frustrated and burnt out. But I wouldn’t change a thing. It has all been wonderful. Shit, I could really spend a day or two on the beach, though.

I originally wrote this on May 5, 2012, which was the first day of the rest of my life.