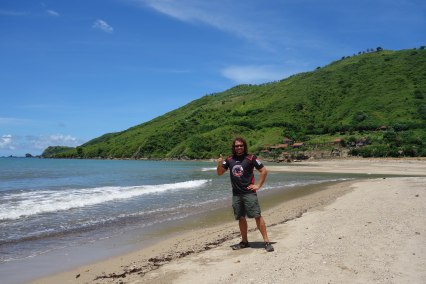 Yesterday, my journey moved on to Kuta. No, I didn’t go back to that rubbish shithole with all the roid midgets and fat fucks on scooters, I came to Kuta Lombok, a similarly-named but completely different place that is actually quite stunning.

But it was a memorable trip here…

My driver was Ekka, a lovely chap who revealed the secret to a happy life: “Eating. Fucking. Sleeping,” he explained, while spending a bit too much time grinning at me and not nearly enough time watching the road. “You have good sleep last night?”
“Not bad.”
“Ekka get no sleep. He up all night making fuck. Fuck, fuck, fuck, all night. If Ekka fall asleep while driving, you wake him.” 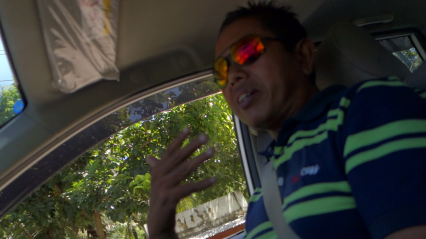 Ekka went on to tell me that he didn’t waste time with girlfriends, he just had fuck friends, and he didn’t mind paying for it. Javanese girls apparently make the best fuck, and his favourite position is doggy style. “Not chicken style,” warned Ekka. “Never chicken style.”

I didn’t ask what chicken style is, but I’ll never be able to go past a KFC without imagining Ekka furiously fucking a Zinger burger.

Kuta is heaps different to its Balinese namesake. There’s very little development here, the beaches are wide and relatively clean (by Indonesian standards – I’d still advise keeping an eye out for syringes) and the scenery is jaw-dropping. Steep mountains jut out of the ocean, palm trees roll off in every direction – it truly is a paradise.

The town is little more than two streets, and there are no hotels on the water… yet. In fact, the only thing close to the beach is a small, run-down village full of peasants and chickens, with all the accommodation and restaurants set a little way back. The tourism industry will change this place, but for now I suspect it like the other Kuta was 30 or so years ago.

Of course, most people are here to surf, and even the scooters have little racks for boards. But I, uh, don’t surf, so ah… Some of the mountains round here look bloody good for paragliding, though.

While Kuta Beach is pleasant enough, the real star of the show is Mawun Beach, around 9km by road to the east. I, of course decided to walk it, not realising that the road ran up and down a series of mountains. I was sweating like a fat chick at a David Hasselhoff concert by the time I got there – and it was worth it.

Mawun stands heads and shoulders above any other beach I’ve seen over here, and even gets pretty bloody close to Maitland Bay in beauty. The most noticable thing was the lack of rubbish on the sand – an anomaly for Asia – and the palm-fringed cliffs, storming out of the clear blue water. There’s a couple of shacks at one end of the beach and nothing more than that. It’s a pretty, quiet, relaxing place that is certainly out of the way and definitely worth visiting.

Just don’t get on the wrong side of the small number of hawkers – one called me an arsehole!

Which brings me to my next point. I can’t wholeheartedly recommend Kuta for two reasons, and they both have to do with its current status as a developing tourist destination. The first problem is the dogs. The place is crawling with them, most of them look malnourished, they don’t have a problem aggressively chasing a person and THEY’RE FUCKING DINGOES. Dingoes are bad arse. The ones here are domesticated, but they’re still fucking dingoes, and they make walking around scary and dangerous.

The second problem concerns the locals. At best they’re overenthusiastic in trying to get you to buy whatever crap it is they’re selling, at worst they’re openly racist and angry. Of course there are lovely people here, but during my walk today I was called every name in the Sasak language, and most of the English ones, too. I was yelled at and sworn at just because of my ethnicity, and that’s something that, thankfully, doesn’t happen in most tourist destinations and which would definitely come as a shock to most. I get it, the people here are extremely poor and probably resent the rich Aussies who come here (even if that rich Aussie has no job and a fucking mortgage to pay for), but it still sucks to walk around and know you’re seen as the enemy. 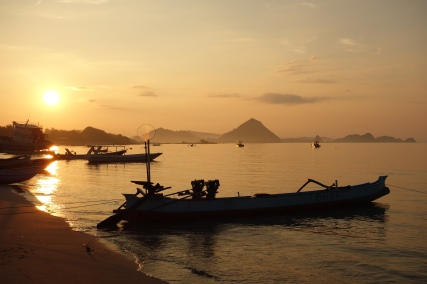