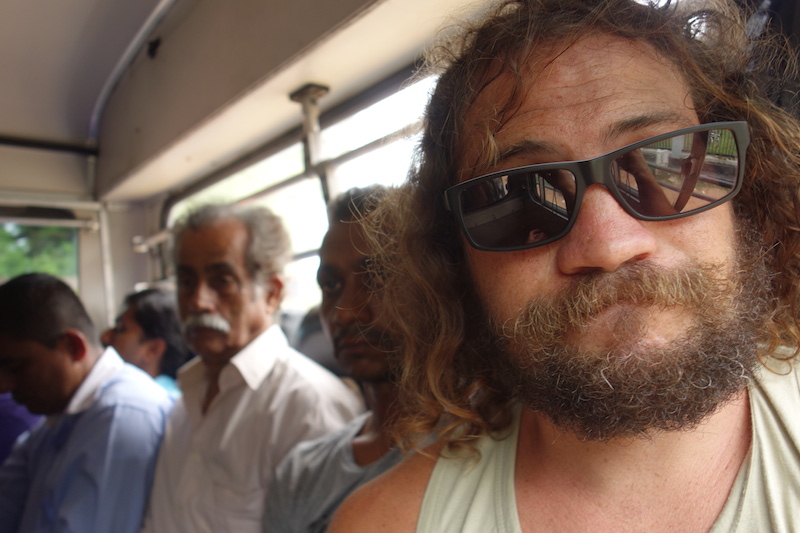 Sri Lanka’s known for lots of things. Extreme poverty. Hot curries. The exotic bowling style of Muttiah Muralitharan. The country is not, however, know for having a great public transport system. That’s because it’s a load of shit, and getting from Point A to Point B is as difficult as explaining the theory of relativity to a yabbie.

I found that out the hard way when I tried to make the journey from Negombo to Kandy. It’s only about 150km, but it took so long I was sure we were detouring past fucking Pluto.

Having experienced everything Negombo has to offer (ummm… the rubbish-covered beach and, I dunno, I’ll get back to you on that one) I decided to head off to Kandy, which lies in the middle of the country. After packing my shit up, I walked downstairs to settle my bill and was told that Rowan, the owner of the guest house, wanted to see me. I waited around for a few minutes and he came over and hugged me, then asked what I was going to do. I told him I was going to catch a bus to Kandy, and he smiled, took my hand, and shook his little head.
“It would be my pleasure to drive you,” he said, stroking my hand. “Only $75, and we can stop at some wonderful places on the way.”

The bus costs around $1 which, seeing as I was staying in the cheapest and shittiest hotel in Negombo, is obviously closer to my price point. The bus also doesn’t require me to talk to some idiot for hours, buy him lunch, tip him, and being pressured into buying a bunch of crap I don’t want from the dozen or so shops we’d have to stop at on the way. When I told Rowan this (I left out all the stuff about a trip with him being as inviting as dinner with a cannibal), he said something in Sri Lankan and fucked off out the back. How’s that for service!

While a trip with that joker would’ve been bad, the bus wasn’t much better. The junker I climbed onto looked like it was built in the 60s and hadn’t been updated since. I found a seat right up the back and spread out, glad that the bus wasn’t too packed. That lasted for about five minutes, when little Sri lanken blokes started piling on at such a speed that I thought someone must’ve announced free papadums onboard. By the time we left, I was squeezed into a seat built not for a normally-sized person like myself, but for some pint-sized Sri Lankan dude who weighs 48kg. We were packed like pickles in porn star’s poontang as we rattled out of Negombo on our trip.

Snappy Sri Lankan pop music blared from the speakers as we crept through the crowded streets, the bus lurching to and fro as tuk-tuks cut in front of us. People jumped off even when the bus was still rolling, and others kept climbing on even though there was no room. Soon, little champions were hanging onto the outside of the bus, obviously not too worried about falling off and ending up under the wheels. Luxurious, it was not, but an experience it most certainly was.

Sitting next to me was a well-dressed chap who had obviously been up watching cricket all night, because he started nodding off as soon as we started rattling along. Cap’n Snooze decided I looked pretty comfortable, because he started leaning up against me, which was alright until his head started sliding down my body as we hit pot holes and bumps. His face was getting dangerously close to my crotch and I was about to wake him up, when we hit a particularly large hole (but enough about my ex-girlfriend!) and he headbutted my cock, waking himself up at the same time.

Shocked to find himself simulating oral sex on a handsome stranger, Cap’n Snooze gave a yelp, jumped up, and leapt off the bus, despite the fact we were humming along at 60km/h and were in the middle of nowhere. He hit the dirt and took off into a thick thatch of palm trees and never looked back. The bastard didn’t even leave his phone number!

Despite most of the journey winding through thick jungle, civilisation never stopped – villages cling to every bit of the road, and people are everywhere. The scenery is actually quite spectacular as the road climbs up into the mountains. Kandy sits in a small valley at the top of the mountains, and from what I’ve seen so far it’s a nice little city. There’s a man-made lake, a giant statue of Buddha up on top of a mountain, heaps of trees, and not that many people, so it’s easy enough to walk. While there are a few aggressive touts, it’s not as bad as India – at least the locals here don’t walk around with unseeing eyes, trying to rob any tourist they see.

After my monumental bus trip, I haven’t done a lot of sightseeing yet, and have instead been impressing lot and lots of women with how cool I am. But I’ll check out that big bastard of a Buddha tomorrow…