After staying in a delightful hotel in Santorini, I decided to save a bit of money and take the rustic approach to accommodation during my time on the quieter island of Paros. Surfing Beach Village offered private cabins by the sand for only $10 a night, so what could possibly go wrong? The answer is, fucking plenty.

The village is smack bang in the middle of nowhere, which is fine because there’s a restaurant and market on site. Except the restaurant and market are closed (and look to have been for some time), meaning the closest food is an hour’s walk away in Naoussa. There is a shuttle bus that heads to the closest town a few times a day, but this is driven by a man who looks like he’s not completely opposed to the concept of rape.

Strange people, who can politely be referred to as drifters and impolitely be called the scum of the fucking earth roam the grounds, which are littered with rotting furniture and other rubbish. They seem sick, with most of them coughing, wheezing, or spending the majority of their time either passed out or dying under the village’s sparse trees.

The pool, which is proudly described on the website as the largest in Paros, is certainly impressive – except for the fact there’s no bloody water in it! It would be rad if if I was an 80s skate dude looking for somewhere to home my skills, but completely useless under any other circumstances. On the positive side, there’s no chance of me getting diarrhea from drinking the water, so that’s nice.

Most of the toilet blocks are stuffed with broken chairs and tables, as if the zombie apocalypse rolled through here at some point and the survivors had to barricade themselves in against the flesh-hungry hordes. The single block that is open smells like several large animals have died in there, and has only squat toilets, with no toilet paper and no running water. I’ve taken to shitting behind trees, and I’m not the only one.

One of the women who works here lives in the tiny cabin next to me with her four dogs. They (the dogs, as well as the woman) bark all day and night, and the stench from the place is so extreme that if one were to light a match within proximity of the cabin, it would surely explode in an impressive fireball. The barking and the stench really add to the unique ambiance of the place.

To make things even better, it’s as windy as the aftermath of a night on the tacos and I’ve picked up a cold from spending time with women of ill repute (and health, apparently). Oh well, at least I got to see a nice sunrise after being woken up by the dogs at 5am, so I can’t exactly complain… 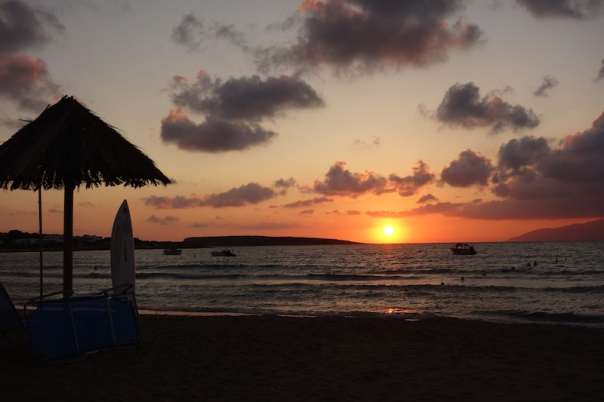