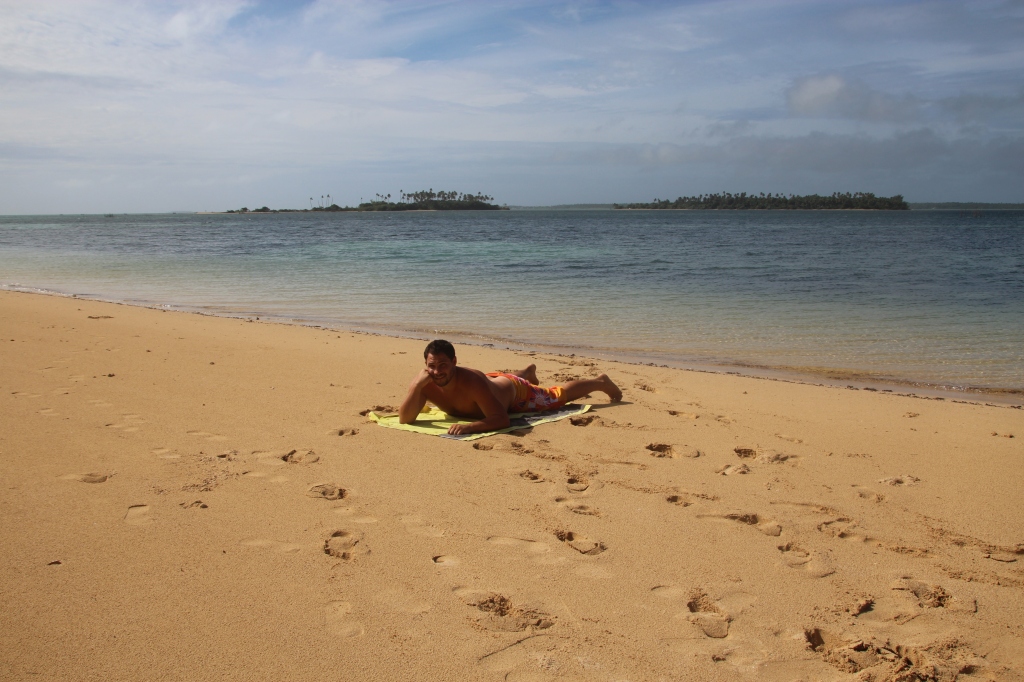 They take their religion seriously in Tonga, so Nuku’alofa on a Sunday is emptier than the Cronulla Skarks’ trophy cabinet. All the shops are closed, there are barely any cars on the streets, and there’s not a lot to do in town. So I decided to head out to Pangaimotu, a tiny island about half-and-hour’s boatride from Nuku’alofa, that promised unspoilt beaches, great snorkelling, and a shipwreck to explore. But first, I had to go to church.

Yes, church, and I was sure the walls were going to fall in as soon as I walked in the front door. Papiloa wanted me to get a taste of Tongal culture and religion, so she offered to take me to her church, before dropping me off at the harbour for my ferry to the island. On the ride in, I told her I’m a writer and she warmed up to me, because it turns out she was formerly the editor of Tonga’s first national paper. I didn’t tell her my form of writing involves scribbling the word ‘tits’ over and over again.

Attending a church service is something you simply have to do if you ever make it out to Tonga. The service starts with people piling into the church from all directions, wearing flowing white gowns or traditional weaved skirts. As soon as they’re all inside, the singing starts, and it’s glorious. Hundreds of voices unite to form a wall of religious sound.

When they were finished, I called out for them to sing Freebird, but they didn’t. In fact, they seemed to take great offence to that and became fairly angry and shouted at me, so I hotfooted it outside and hid under and upturned tinnie until Papiloa came back to take me to the ferry.

The ride out to Pangaimotu was brilliant, especially because the clouds cleared up to reveal a brilliant day. I landed and wandered off on my own, and spent the next few hours lying in the sun, chasing fish through the warm water and posing for sexy photos.

I dived off the wreck, and was amazed by the size of it (that’s something no woman has ever said about me!). The boat disappears into the deep, deep water, and thousands of neon fish swim around it. I was having  brilliant time until I came face-to-face with a huge eel (no, not Jon Mannah) and headed back to shore. I didn’t want to be bitten on the arse or anything.

It’s not a big island, so I decided to walk around it. I felt like I was shipwrecked on my own personal island I I crept through palm groves and splashed through swamps, with no sign of civilisation. I was swaggering along, singing my favourite Taylor Swift ditty (Fifteen, if you’re wondering, because it always makes me think about my teenage years), when I realised that the tide had come in, and I couldn’t make it any further. By sheer coincidence, the tide had also come in behind me, cutting off my escape. I was trapped!

Instead of panicking like some sort of dickhead, I lay down and had a nap, and when I woke up the tide was even higher and I was even trappeder. I climbed a tall palm tree to see where I could go, but there was only water on one side and jungle on the other. Shit, I hadn’t seen bush that thick since I banged that hooker in Taree.

I was just about to start crying (about being stranded, not about the Taree hooker not returning my calls, emails of post cards) when I heard someone calling from up the beach. I looked over and there was a massive Tongan guy sitting in a very small boat.

“You are stuck, my friend?” he called, and I nodded my head as if my neck was made of spaghetti. “Every day I come out here, every day some idiot get stuck. Climb in.” So I did, and this chap took me back to the south of the island, calling me an idiot at least five times before holding his hand out for a tip. He outweighed me by about 100kg and had some sort of ornate fishing spear by his feet, so I didn’t hesitate to cough up before popping into a kooky little bar for a drink.

The beer was cold and the view sensational, as the sun dipped below the horizon and the sky turned blood red. The whole bar was made of driftwood and other scavanged bits and pieces, and I had a lovely time just sitting there and looking out at the ocean and smashing half-a-dozen bottles of Maka. All too soon, it was time to leave.

For dinner, I rocked up to the only restaurant in town that wasn’t closed, a Chinese place. The food was good, but the waitresses were better – a couple of cute Tongan sheilas who were mega keen on the Row Show, and asked me come out with them for a drink tomorrow night. But, alas, I won’t be here, and I won’t be able to take them up on their kind offer. Definitely won’t be able to. I’ll be somewhere else. I mean, what could possibly go wrong?

One thought on “How the fuck do I get off this island?”