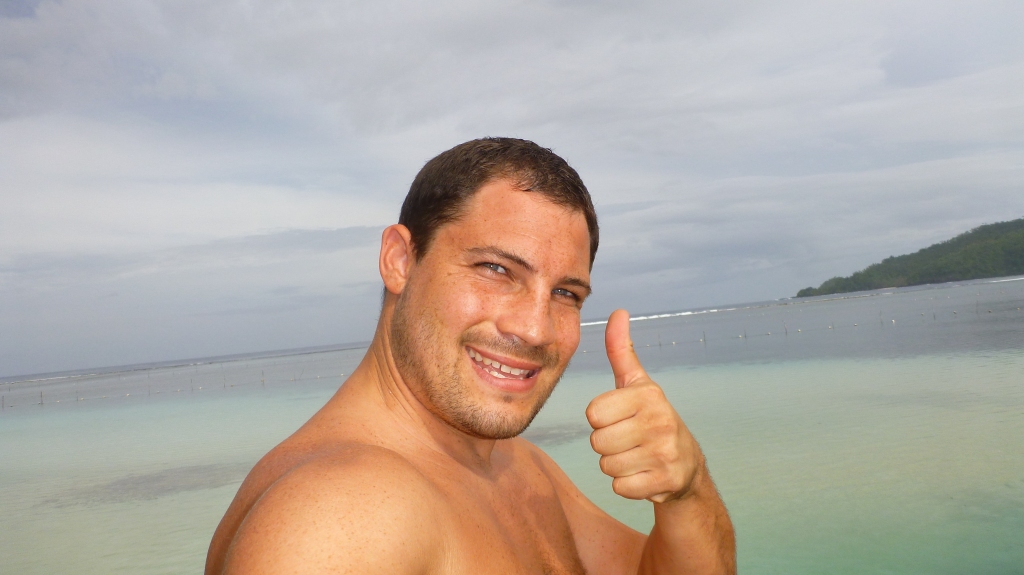 Last night, I had the best sleep of my life. Alright, second best, after that time I tried heroin. I woke up to brilliant sunshine and swaying palm trees, then matched it with a giant breakfast of cereal, fruit, eggs and toast. I can tell you, the morning after my experience with heroin wasn’t anywhere near as pleasant.

With storm clouds on the horizon, I grabbed my snorkel – no, that’s not a euphemism, bloody hell, grow up! - and hit the bay out the front of Le Valasi’s. And it was an incredible swim! A lot of fish, some delightful coral, and I even saw a turtle bludging around! The best bit was the giant clams, which Ross planted out there a few years back. I knew they were out there somewhere, but it still took me an hour to find them. I must be retarded because they’re absolutely huge and there’s about 50 of them, so they were as easy to miss as an elephant in a preschool.

I spent ages taking photos of the clams, then poking sticks into their open mouths so they would snap shut. I almost pissed myself with fright a few times when one would latch onto my fin. Then, with the rain beating down and my hands looking like prunes, I paddled in to pack up my stuff and move on with my adventure. Savaia is a wonderful village and my hosts were great, so I felt a genuine sadness as I drove away.

I was heading towards the Manafuse Wharf, on the west coast of Upolu, where I would take a ferry to Samoa’s other island, Savai’i. Although bigger than Upolu, it has only a fraction the population, and most people reckon it’s a lot wilder and less developed. Seeing as the biggest building in Upolu is the local pay phone box, that’s saying something.

The trip to the wharf was pretty, but difficult. The road took me up a steep mountain, giving me a mind-melting view back towards Lalomanu, providing a chance to reflect on the past two days. Unfortunately, the Rav didn’t enjoy the drive nearly as much as I did, and a few times I thought it was going to roll into the abyss below. Erm, it didn’t, though, and I eventually made it to the wharf.

Which is when a cyclone decided to roll in. My time in Samoa had been punctuated by constant weather changes, but this was something else. One minute I was parked in the line to board the crowded ferry, the next it was absolutely belting down and I was unsure whether I’d even get to Savai’i. And even if I got on the ferry, what were the chances of it crossing islands without sinking?

After a major delay we were led onto the rickety vessel, and soon I was surrounded by Samoans and their dogs and pigs and chickens. It was quite a sight, and things got even weirder when we took off and the boat was rocked by massive waves and started tipping in every direction. A few of the locals were chundering, one poor bastard fell off the side and had to be rescued, and a chicken got thrown into the side of a car and killed. Somehow, I managed to keep my lunch down.

Once on Savai’i, it was a quick run up to Manase, at the top of the island. The big island is a lot easier to traverse, with less people and dogs to dodge, but there are plenty of pigs. The beaches go on forever, with the villages few and far between. When I got to Tanu Beach Fales, it was nice, too, even though I arrived around sunset and it was almost deserted. Despite having accommodation for, I dunno, 200, I was one of only four people called to the dinner table.

Two of the others were a young German couple, and the other was an elderly gentleman with a full-face tattoo. At first I thought he might try to stab and eat me, but I soon realised that Henry is a lovely old bloke with a few stories to tell. Unsurprisingly, he’s a tattooist. He had a successful ink studio in LA for years and scribbled on Pamela Anderson and… well, Henry’s dabbled in the drugs from time to time so he can’t remember who else he’s worked with.

He also told me his partner was a former Miss Universe, which impressed me greatly and led to me talking about how much I’d like to do sex with Jennifer Hawkins. He had to stop me because I’d misheard him - his partner is a former MISTER Universe called Steve, a musclehead who has apparently gone mad on steroids.

Henry spends half the year in Palm Springs, California and the other half at Tanu Beach, where he possessed nothing more than two t-shirts and the ability to sit in the same spot for hours at a time, amused by whatever it was that was going on inside his mind. And from the look of him, what goes on inside Henry’s head is fantastic.

The entertainment for the night was provided by some of the local children, who danced traditional dances while we ate. On a side note, who new that the Macarena was a tradional Samoan dance?

I’m now sitting in my fale drinking a beer, looking out over an ocean painted silver by a full moon. I’m going scuba diving in the morning, so I guess I’d better get some sleep. Yeah, I may not be getting chased around by weirdos, or shitting myself on trains, but I could get used to this life.