Paje is famous for it’s beaches, but that’s not all this Zanzibarean delight offers. The Jozani Chwaka Bay National Park is all that’s left of the island’s indigenous vegetation, and is home to thousands of zany monkeys. As a primate fancier (no, not in that way) I was determined to head out to the park whilst staying in Tanzania. As I’ve been living on beer and pizza for the past week, I decided to ride a pushbike out there, and asked for one at my hotel’s front desk.

​”I’ve got a bike, you can ride it if you like,” sang a very camp black man, pushing an old-school fixed gear clunker out from the shadows. “It’s got a basket, a bell that rings and things to make it look good. I’d give it to you if I could, but I borrowed it.” Whilst oddly phrased, I thought it sounded like a good offer and started to say yes, when my new mate cut me off.

“You’re the kind of girl that fits in with my world. I’ll give you anything, everything if you want things.” The conversation had become uncomfortable, so I took the fucking bike and got out of there.

It took me about three seconds to realise the pushie was a piece of shit and was probably built back when the world was still black and white. I wouldn’t be surprised if it’s first owner was a triceratops. If you know anything about my sex life, you’ll be aware that I refuse to ride anything that’s banged up and older than me, but I didn’t have any other options, so I rode that clunker 17km through farms and forests, up hills and around villages. I don’t reckon Lance Armstrong could guide that thing to see dealer, but I made it all the way to the legendary Jozani Park. Go me!

The jungle is as thick as an Arabian’s pubes, and I couldn’t wait to get amongst the trees and start tracking down monkeys. My plans were scuppered, however, when I was informed that I’d need a guide to take me out there. As an Australian, the thought of paying some dude to help me walk through the bush makes as much sense as paying some dude to root your girlfriend, so I told him that there was monkey on fire behind him, and ducked into the jungle when he turned around. It was far from the first time an imaginary flaming monkey has saved me.

After traipsing through the jungle for half an hour, I stumbled into a clearing and realised that I was being watched by dozens of pairs of tiny eyes. Red colobus monkeys were perched in every tree, and a swarm of shifty-looking Sykes’ monkeys were hootin’ and hollerin’ and pullin’ themselves off. It was an incredible, and I felt like I was in a nature documentary as the wildlife lived wildly around me.

Of course, that didn’t last long. I was sitting a metre away from a colobus and feeling at peace with the world when I heard gutteral screeching coming from the bush. I thought it might’ve been a herd of wildebeest, but it was something much worse – a bunch of Germans! They smashed through the bush, squawking away in their grinding voices, scaring all the monkeys away as they rushed to take selfies of themselves. My monkey friend gave me a worried look and then disappeared into the green while a fat, sausage-guzzling German ran after him. The moment was lost.

I left the krauts to continue their blitzkrieg on the bush, and crept through the bush on my own, finding monkeys everywhere I went. I’ve seen elephants, rhinos and giraffes over the past couple of months, but this experience was special because I was able to become completely immerses in the monkeys’ culture. After an hour or two I felt more simian than man. I was sitting in a tree, sharing a banana with a cute little critter named Kirk and contemplating dropping out of society, when the monkey placed his paw on me. He looked into my eyes, and I into his, and the message was clear. As much as we both wanted to spend our days in the trees together, I had to go back to my world. We were just too different. 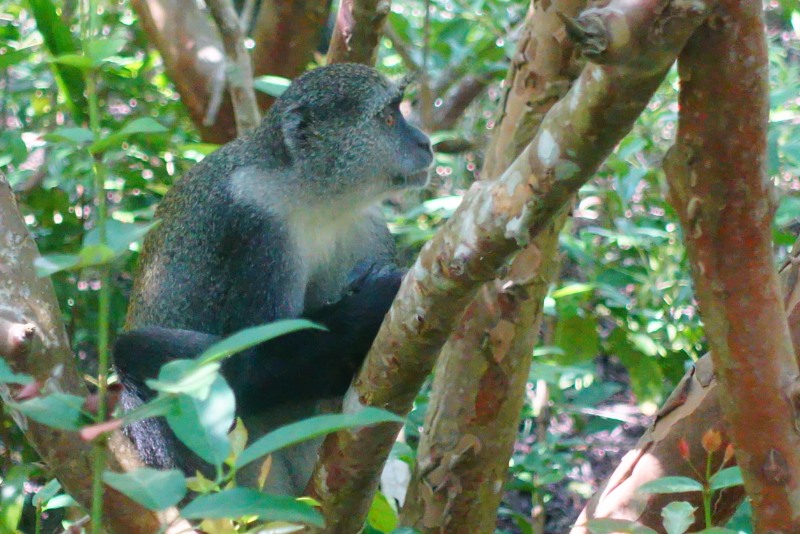 I hugged the monkey, wiped a tear from my eye, and climbed back to the ground. I was miserable, but I knew it was the right thing to do. I looked back at the monkey and waved as the sweet sadness of departure washed over me. And then the contents of the monkey’s bladder washed over as the dirty bastard pissed into the afternoon sun. That’s the last time I give my heart to a fucking monkey.