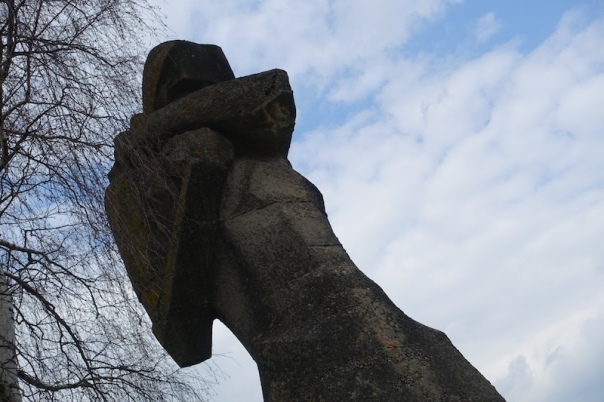 A trip to Europe can’t all be about beer and kebabs – although that sounds like a bloody good way to spend a few months! There’s so much history in this magical land, and a lot of it isn’t particularly happy, as I found out today when I took a trip out to the site of Salaspils Concentration Camp, just south of Riga. It was an unpleasant trip, but one that I’m certainly glad I took.

Salaspils was opened by the Nazis in 1941, and over the next four years, tens of thousands of innocent people passed through there. It wasn’t a death camp, instead it was mainly used for either processing victims before they were sent elsewhere to be killed, or for forced labour to help the German war machine. Yeah, that’s bad, but it gets worse. Salaspils was the site of a bizarre and putrid act that sounds like it’s straight from a science fiction film.

As well as Jews, Russians and other prisoners of war, a large proportion of the inmates at Salaspils were children. The main reason they were kept there was to serve as forced blood donors for Nazi soldiers. These poor, innocent children were basically farmed as blood bags, a concept that will probably keep me up at night for a long time to come.

The memorial to the camp is fairly easy to get to and definitely worth going to, but it’s not really in any of the tourist guides and basically kept out of sight, out of mind, which is a shame. To get there, simply jump on a train from Riga Central to Darzini, and follow the signs to the memorial. Darzini is in the middle of nowhere and I was a little bit worried about getting stabbed by some inbred Baltic sicko as I left the station and started walking down a lonely path through the forest.

It’s not a bad walk actually, and there are signs pointing the way to the memorial, so it’s nice and easy. It was really peaceful, with no sounds but the birds in the trees. But as I covered the two kilometre journey, the clammy sense of evil started to descend upon the forest like a fog. When true evil happens it never really leaves, and the ghosts of the tortured still haunt the forest outside Darzini.

The memorial is certainly confronting, and without thinking I held my breath for at least a minute as I walked through the large concrete gate at the entrance. The Nazis razed everything when they abandoned the camp, so there are no original building, but what is there is remarkable. Four gigantic statues stand in the grounds, dedicated to those who suffered so much. The are impressive and heartbreaking in equal measure.

I spent an hour of so just walking the grounds, thinking about what had happened in this remote spot in the woods. There is no sound but the wind in the trees and the never-ending thump of a heart, resonating from a stone monument and representing the unbreakable spirit of the Latvian people. People still leave toys at the site of the children’s barracks, which is creepy. In fact, the whole place is, and what makes it so much more powerful than, say, Sachsenhausen, is that it hasn’t become a tourist attraction. While few people visit Salaspils, it’s one of the most moving monuments I have ever been to, and I can’t recommend it highly enough.

Wondering where all the bad jokes, kebab reviews, and updates on my love life are? Due to the subject matter of this post, I’ve decided to chuck all that in a separate entry, which I’ll put up if and when I get back from having a well-earned drink in Riga. Cheers.

2 thoughts on “When the Nazis came to Latvia”