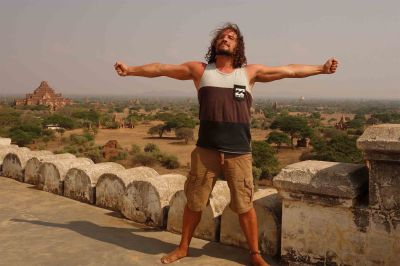 Bagan has more temples than Rebel Wilson has had meat pies. 2200 in fact (thanks, Wikipedia). And today I saw all of them… except for the 2100 I missed out on because I went to the pub. But there’s not a massive amount of variety between them, so I think I got a pretty good idea of what they’re about.

I’ve been eating well and drinking better over the last few weeks, so I decided to rent a pushie for the day rather than one of those poofy electonic bikes. And so, at 9:30, I slogged off on flat tyres into the 35 degree heat, hoping I could see some temples through the dust.

It’s a bit hard to miss ’em. They’re dotted everywhere. Small ones, big ones, pointy ones, square ones. The more famous sites are crawling with peasants trying to sell souvenirs, but the rest are basically empty, save for a few monks. Biking it (whether the Cadell way or the softcock way ) is definitely how to explore this place. I didn’t have a map, but every time I saw something interesting off in the dirt I just toddled up there and checked it out. It’s easy and relaxing, and a great way to spend a day that other people are spending working.

Things were going swell until I went to ride away from one of the temples and heard a loud crunch. At first I thought I’d ruptured a testicle, then I realised that I hadn’t taken the bike chain off before pedaling off. The chain was fucked, the wheel was bent, and I had to come up with a plan. I started coming up with plausible lies, but then I went to the pub and forgot about it, so when I took the bike back I told them that a monk did it.

A monk! No explanation, just that some rogue monk came up and damaged the bike, then sauntered away.

They apparently bought it, but I’m expecting a bald dude in a robe to stab me in the eye as soon as I step out the door.

It’s weird that Bagan receives so little recognition compared to Cambodia’s Angkor Wat, because it’s every bit as interesting and far easier to explore due to how close together the temples are – sometimes there’s only a few metres between them, and from a high spot they spread out to the horizon. And, unlike Angkor Wat, I’ve managed to go a whole day without pissing or puking on the monuments. Gimme a break, when I was at Angkor I went out drinking till 3am, so I was lucky to even get out of the hotel room.

Just on that night that I got drunk in Siem Reap, it was the first (and, so far, only) time I have vomited on a frog. I didn’t know it at the time, but I filmed myself spewing in the street, and when I watched the video back it was clear that my partially-digested Mexican dinner landed on a hoppity-hop. I’m not even lying.

To wrap it up, Bagan is a top place and worth a visit, with my recommendation that you check it out on your own, without bothering with a guide or tour group. They’re expensive, slow and expensive, and half the fun of this place is discovering it for yourself, and walking around seemingly abandoned ruins with little idea of why they’re here. One full day is enough, unless you’re a total history buff.

Just don’t go to the similarly-named Bogan. There, monks don’t just bend your bike’s wheel, they steal the whole fucking thing and push it into a river when they’re finished with it and wanna go smoke some bongs.