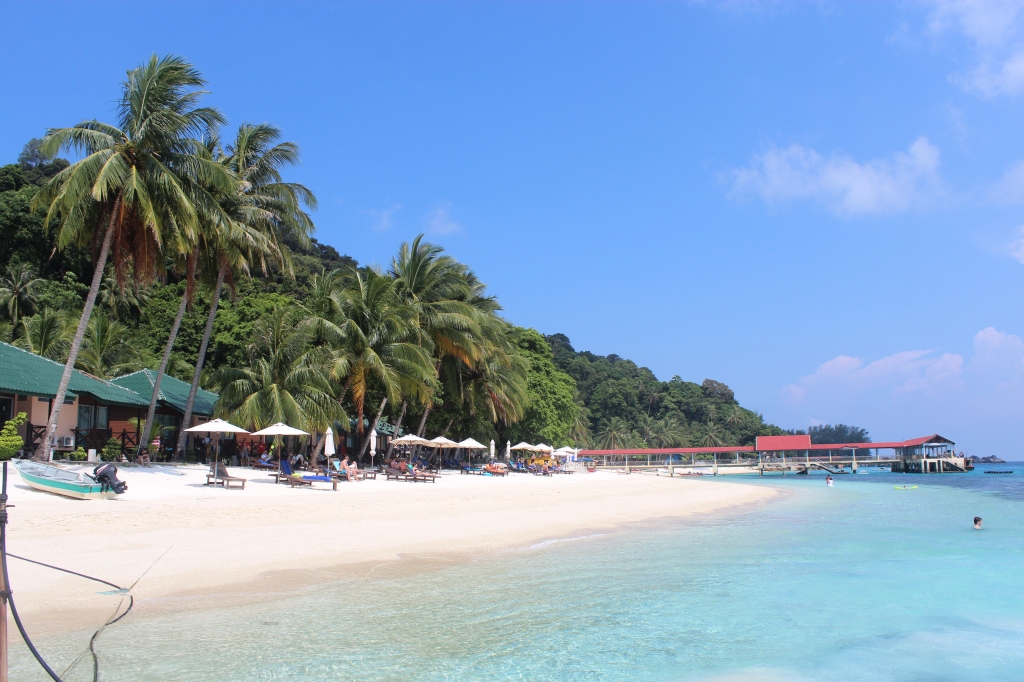 Travelling can never be simple for me. If everything went to schedule I’d be catching a taxi to the airport, a plane back to Kuala Lumpur, another plane to Kota Bharu on Malaysia’s west coast, a taxi to a tiny little town called Kuala Besut, and then a boat out to the beautiful Perhentian Islands. But there was a possible problem between me and the final destination of my adventure – the time between landing in KL and jumping on the next flight was a slim 95 minutes and if anything went wrong there, I could say goodbye to a one of my three nights on the islands. Even Clementine Ford’s bedsprings aren’t under that much pressure.

I got my shit together and walked out of my room, and was shocked to see a huge pile of garbage opposite my door. As I walked past, fuck me, one of the bags moved! When I looked closer, it wasn’t a black plastic bag full of garbage at all, it was a black plastic bag full of sweaty, naked Cled. For some reason he was wearing the bag as a sort of one-piece suit and was hiding in amongst the rubbish, doing his best to not be seen.

“Cled, mate, what’s the deal with your clobber?” I asked, and he pretended like he’d just seen me.

“Oh, this? Everyone’s wearing garbage bags this season,” he swanned, then blushed.

“That’s a load of crap, what’s the real story?”

“Alright, and then what happened?”

“Well, my body may be beautiful and sensual and covered in a fine layer of fur, but it doesn’t have any pockets to put keys in, so I was locked out of my room.”

“So you decided to climb into a dirty garbage bag and sit in a pile of rubbish?”

“I figured the cleaners would be around at some point, and when they opened the door I could sneak in like nothing happened.”

“Oh yeah, there’s nothing as inconspicuous as an obese American climbing buck-naked out of a fucking garbage bag.”

“Oh, you’re going? Have a safe trip.” With that, he stood up and a gentle breeze lifted the bottom of his bag dress, exposing the tiniest, hairiest little cock the world has ever been cursed with. He chucked out a hand, and I politely declined. Shit, I almost cut my hand off after touching him the first time, so I didn’t need to do it again.

I mate it to the airport alright, but or some absolutely batshit crazy reason the good people of Brunei don’t use scanners to check carry-on luggage before the flight. Instead, they had two or three little blokes who would open up ever pocket of every bag and rifle through it. And they were slower than a retarded turtle. The woman who checked my bag  grabbed a pair of my undies and gave me a big smile, but I wasn’t in any mood for returning the grin, and it wasn’t just because of the skidmarks.

I made it onto the plane, took my seat and waited while the other passengers s l o w l y filed in. Our departure time came and went, and still people were climbing on. Ten minutes late… 15… 20. Finally, 22 minutes after we were supposed to have pissed off, the doors closed and we started moving off. Crap.

As you can guess, it wasn’t a particularly fun trip. For the next hour, I was on the edge of my sleep like a bloke with haemorrhoids. We landed, I pushed my way through the other passengers and sprinted the 2km to the baggage terminal, dodging fatties and diving past strollers and champions in wheelchairs. I cleared customs in seconds, got my bag without too much trouble, and blazed my way to the other side of the airport to check-in. Tick, tock, the clock counted down. With only minutes till check-in closed, I made it to the counter…where a dozen fat, useless pricks were flobbing around in front of me. To make it worse, another half-dozen chubsters pushed in front of me, claiming they were there with some prick in front of me. I told them to get fucked. Tick, tock, tick, tock.

The check-in time passed. I’d missed my flight. I wouldn’t make it to Kuala Besut in time for the last boat. I’d be stuck in a rubbish little town for the night rather than a beautiful island paradise. I might even get raped. And all because of the incompetence and selfishness of others.

And then an angel appeared. A spunky young chick walked over and asked if anyone desperately needed to check in, and then took me to an emergency counter. I handed over my details, and the girl smiled. Hoo-fucken-ray, I made it onto the plane just as it was about to taxi out! I didn’t get the spunky young chick’s name, but ya can’t win ’em all.

With that out of the way, the flight was relaxing, and before long I was in delightful Kota Bharu. I say it’s delightful, but I wouldn’t have a clue, because I jumped in a cab and pointed him towards the village of Besut, an hour south. As the towns and villages rolled past, I was obvious the eastern side of the island is very different from the west. Almost everybody was in traditional islamic dress and mosques decorated the skyline.

I’d heard that Kuala Besut was a boring little nothing place that was only worth staying at if you missed the last boat to the islands, and they weren’t wrong. I had a decent amount of time to kill there till I set sail, and after five minutes I was bored out of my skull. There’s one main road with a handful of shops, a couple of deserted side streets, a polluted beach and… that’s it. There wasn’t even an ATM, which was kind of shitty since I knew there wouldn’t be one on the Perhentians, and I barely had enough dosh in my wallet to pay for my accommodation and food. Shit.

The boat finally rocked up, I dragged my suitcase onto it, and we set out into the blue. And, as we drew close to the Perhentians, it was astonishingly beautiful. I’ve been to Thailand, Vietnam and Newcastle, but nothing could prepare me for the unspeakable glory of these islands. Rainforest-covered mountains climbed out of crystal-clear water before my eyes. Thousands of fish danced below me, while cute little huts hugged the beach, with just a smattering of suntanned visitors wandering along the sand or snorkeling. It was like a computer screensaver come to life, but I definitely wasn’t sitting at my desk.

The little boat dropped off a handful of people at different beaches, and then we puttered along to Petani Beach, which was perhaps the most wonderful of them all. At the eastern end a dozen bright red bungalows ran up the hill and disappeared into the forest. In the middle sat six tiny, rustic huts that looked like they’d been washed up in the last high tide – my accommodation. Not a person was to be seen, and it was exactly what I’d hoped it would be. It was, in a word, paradise.

The captain of the boat honked his horn and a little Malaysian dude came rushing out of one of the huts. He dived into a dinghy and came out to meet us, and I carefully stepped into his ride, making sure not to fall into the bright blue ocean beneath me.

He introduced himself as Ebu, and after a short but fun blast, I was dragging my can-filled suitcase along the most wonderful beach I’d ever seen.

I walked into a hut that looked like it must’ve been the front office, and was appalled to see a bloke choking the chicken in his living room. What, no, don’t have such a dirty mind! He wasn’t masturbating, he was actually choking a chicken so he could cook it for his dinner. After Ebu raced over to tell me I’d just wandered into some strangers house uninvited, he led me to my room and handed me a towel and a snorkel set. No key, but then a key wouldn’t be much use when my door didn’t have a lock on it.

Wasting no time, I changed into my boardies and raced the 15m to the beach, then dived into the water. It was wonderfully warm, and incredibly relaxing after a long day of travelling, but I wasn’t here to splash around like a downie in a bath, I was here to see some fish! And shit, did I see some fish! Just a few metres from the shore was a reef that was absolutely crawling with thousands upon thousands of the scaly little bastards. There were clown fish, blue fish… ah, red fish. I even saw a sea cucumber, but enough about my penis.

Life under the surface of the water was every bit as wondrous as the mountains and beaches that rose above it, but far, far busier. I spent over an hour just following fish around, taking photos and generally just floating around with a big, goofy look on my face. When I finally got out I relaxed on the beach, dividing my attention between my book and the spunky, bikini-clad babes spread out on the towels next to me. I got so turned on that I almost had to rub my sea cucumber.

With the sun setting, I had a cold shower and headed over to Petani Beach’s only restaurant, a wonderful little wooden shack that’s completely open to the beach and made entirely of driftwood. The sunset was astonishing, and after a seafood dinner I decided to see what the island offered in the way of nightlife.

There’s only two ways off Petani Beach at that time of night – a bush path to the east, and one to the west. Both were pitch black and scary-looking, but I took the one to the west and walked blindly through the gloom, with only my mobile phone for light. After an hour I found the main backpacker beach, which wasn’t exactly Surfers Paradise, but there were a few little bars that served the liquid medicine I required – beer, glorious fucken beer! And there were also girls, glorious fucken girls!

An hour later I was shitfaced and dancing like a fucktard on the beach, when one of the hot Germans from Petani walked up and started dancing with me.

“Were you thinking of us.”

“What were you thinking about us doing.”

“I was thinking about slamming you harder than a sledgehammer into the Berlin wall.” Smooth.

Good old-fashioned romance won the day, and the chick said we should probably get back to our shacks – and that her mate should come with us. Ooh la la, as the Germans say.

Things were looking great for the Row Show, and I would’ve had a great night if it wasn’t for that bloody hour-long walk through the darkness. My torch gave up halfway back, the moon wasn’t nearly strong enough to light our way, and it wasn’t long before Helga and Eva (or whatever their fucken names are) tripped over a root and slid down a muddy slope, ending up in the ocean at the bottom. I, of course, acted like a perfect gentleman and laughed my arse off, which obviously wasn’t the correct response, because when we got back they went into Ebu’s hut instead of mine.

3 thoughts on “Welcome to Paradise”