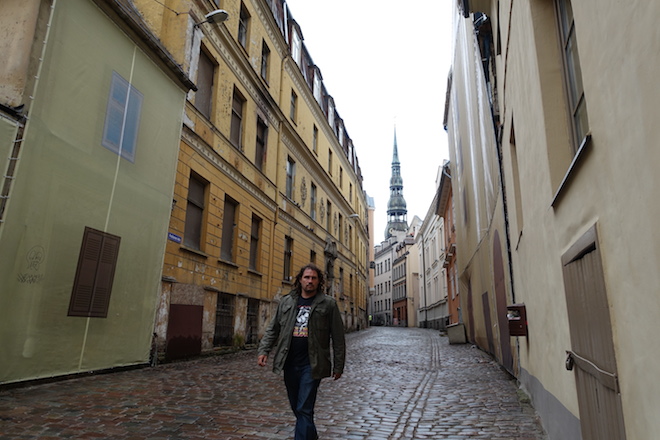 Riga is a top city and I definitely recommend you check it out sometime, but there is one major problem with it: you can’t sink bulk piss in the street. I found that out the hard way, while downing a can of Mitava beer in front of the Freedom Monument, the most revered and respected statue in the country. 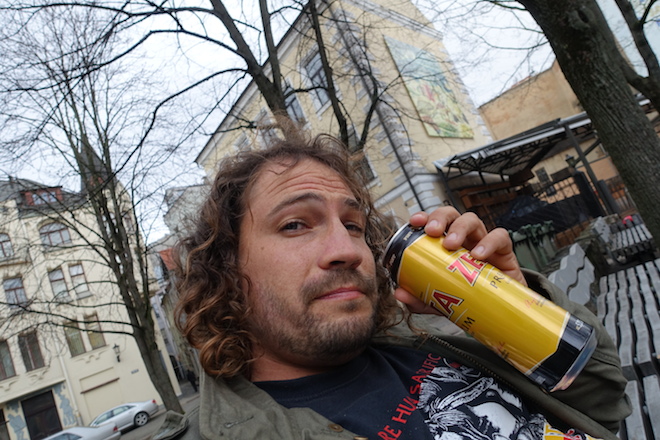 I was just hanging out, being cool, when I felt a tap on my shoulder. Assuming it was some big-titted Latvian sheila looking for a good time, I turned around with a smile, only to see a couple of stern-faced cops. They started barking at me in Latvian and, not knowing what they were banging on about and feeling a little nervous, I took a swig of my can. That was the wrong thing to do.

One of the cops slapped the can out of my hand and kept shouting at me, so I told him I didn’t have a bloody clue what he was banging on about, and he finally realised I wasn’t a troublemaker, and instead a fun-loving Aussie with a cheeky attitude and a heart of gold. “In Latvia, we drink in bar, not in street like animal,” he told me, and I immediately started wondering if a lot of dogs and cats have problems with alcohol over here. “You put beer can in bin and go away!”

I put the can in the beer and went on my way. I was disappointed to lose almost an entire half-litre can of beer, but relieved that the cops didn’t force me to have sex with them.

Apart from almost getting thrown in the gulag, my first full day in Riga has been ace. I slept in long enough to kick my jetlag to the curb, then set out for the city’s central market. I expected it to be like Sydney’s craptacular Paddy’s Markets, with nothing to buy but mobile phone covers and poorly-fitting shirts with Jimi Hendrix printed on the front, but it was actually really worthwhile. It’s a traditional market aimed at locals, not tourists, with a bunch of outdoor stalls selling clothes and several giant halls selling meat, vegetables, and fish.

Riga doesn’t have a long list of world-famous sites. Shit, most people in Australia don’t even know where the city is (I didn’t until about two months ago, to be honest. The allure of the city lies in walking down its cobblestone streets and soaking in the culture and history, but there was one giant monument that I really wanted to see: the Riga Radio and TV Tower.

At 368m tall, the tower certainly stands out against Riga’s diminutive skyline, where few buildings stand more than four storeys high. It’s actually the third-tallest tower in Europe and a very impressive sight, so I knew I had to climb it. The handsome three-legged tower is a couple of kilometres south-east of the city, so I took a strut along the Daugava River. It’s a very baron landscape as soon as you leave the CBD, with withered trees and quiet streets. At times, Riga really does seem to be the end of the world.

A trip to the tower’s viewing platform, which stands 97 metres above the ground, costs just three-and-a-half Euro Spacebux, and that’s about all it’s worth, to be honest. I’ve been up a lot of the world’s best towers – the Eiffel in Paris, the Oriental Pearl in Shanghai, the fucking Coight Tower on Knob Hill (tee-hee) in San Francisco, and they were all better than this. There are two main problems; the tower is too far from anything to get a view, and it’s enclosed, with dirty windows obstructing most of the view.

Still, the view from the platform accentuated just how weird Riga is. While the city proper clings to one bank of the river, the other is basically empty, save for some strange little shanties scattered around, that look straight out of the third world. It’s such an alien world, worth visiting if only to see and feel how different it is from anywhere else.

I spent the rest of the day rolling through Riga’s old town, drinking beer in the streets as if it was legal, trying to get into museums that all seem closed, checking out Latvian women and, finally, accidentally becoming public enemy number one. Yeah, I’m still dirty on it – after all, there are real criminals out there that could be chasing down, starting wih the fucking bongo-playing hare krishna cunts who keep making a racket outside my bloody window. Go get ’em, boys!

Beer of the day:
The can of Mitava I was downing before the po-po so rudely interrupted me was smooth and delicious, not too heavy but full of flavour. The can also comes with a bit of gold foil over the top, so it’s the oversized can of choice for the discerning street alcoholic. 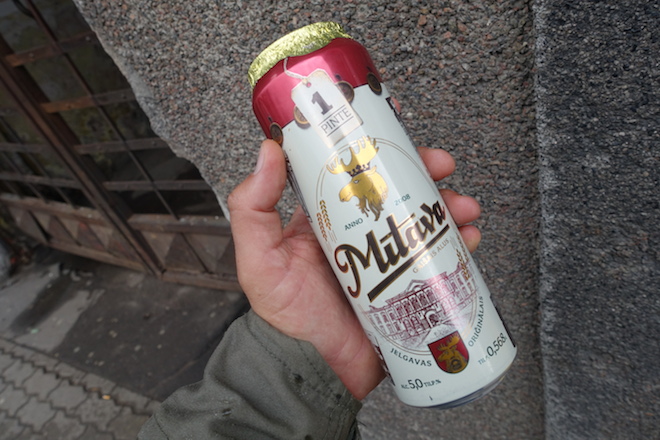 Kebab of the day:
I had a falafel wrap from TurKebab, and it was unlike any I’ve ever had before. I asked for it spicy and, unlike yesterday’s disappointment, it was definitely hot. It had a delicious BBQ sauce drizzled over it, but there was too much of it, overpowering the taste of the falafels and the other ingredients. Not perfect, but a good meal. 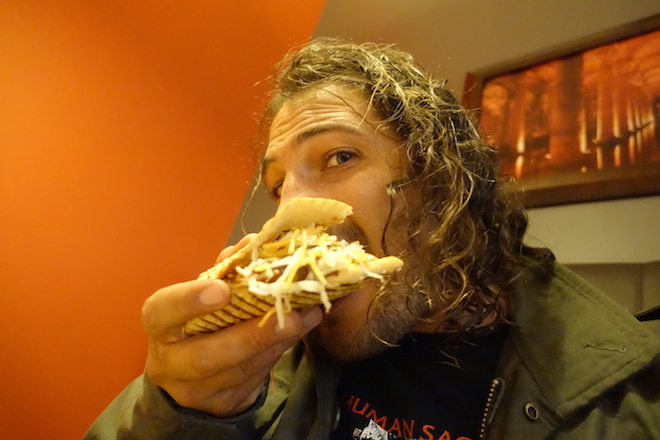 Did I find the greatest love the world has ever known?
Unfortunately, no, but a very fat woman at the market pinched me on the bottom and then waddled away to buy some dried fish. I guess I’ll take it.

4 thoughts on “Latvia’s Most Wanted: How I almost got arrested for public intoxication”