With no concrete plans for the day, I just got up and started walking. The Forbidden City sounded like a fun place to see, so I started wandering in that general direction, finding a lovely little park on the way. Of course, Jingshan Park was crawling with people and about as relaxing as a bubble bath with Ivan Milat, but there were some cool flowers and dancing Orientals. There was also a temple right up on top of a hill, so I climbed up there and joined the throngs looking out over the city. Well, what I could see of it, which wasn’t a lot because the air quality was as pure as my last girlfriend.

I did get a view over the Forbidden City, which is awe-inspiring at first sight. The red roofs seem to go on forever, and it felt like I’d been transported back in time.

I decided to wander down and check it out up close, stopping for a few delightfully warm beers on the way. With a nice little buzz going I went into the ancient kingdom, and it was pretty cool. And it got cooler with every beer I slugged. Shit, can you imagine being able to buy beers at a historical site in Australia? Bloody hell, the cops would tazer you if you started nibbling on a bit of alcoholic fruit cake.

One of the things that sucks about traveling solo is that the only photos you end up with of yourself are your giant, disembodied head obscuring whatever landmark you’ve snapped yourself in front of. Luckily for me, I brought along a lightweight, quick-release tripod, so I was able to get photos and videos of me chucking thumbs-up signs and dancing in Tiananmen Square. Yes! [A note from 2015: My tripod doubles as a selfie stick, but on the rare occasions I used it for that purpose three years ago, the Chinese looked at me as if I had two heads. Now, it’s as if Asians have selfie sticks permanently attached to their hands. Did I introduce this dubious piece of technology to China? Yes, yes I did.]

I probably could’ve thought out my fashion choice better, though. While visiting the location of one of the world’s most infamous massacres, I decided to wear a Day of the Dead shirt, featuring a bloke with half his head blown off. Nice one, Row-Row.

Speaking of the killings, there was no mention of them at all, which wasn’t a surprise. History has basically been written, the sins of the past erased so that no lessons can be learnt from them. [Another note from 2015: What I thought was Tiananmen Square, wasn’t Tiananmnen Square, it was another place that kinda looked like it. So, yeah, that’s why there was no mention of it.]

After that I made my way over to the famous Wanfujing Street, where I found THE GREATEST SHIRT EVER. Ya know how they have those I Love NY shirts? Yeah, well there’s one for Beijing,,, I Love BJ. I bought it, of course, and will proudly wear it for the rest of my days. I’ll leave it up to those who see me wearing it to speculate on where I love giving or receiving the mouth hugs.

If any hot chicks are reading, I prefer receiving.

After a feed of Maccas I made a quick stop off at the hotel for a desperately-needed break from the crowds, then rolled on up to the Bell Tower district for dinner and a perve on the babes. Ah, the temples and stuff are good to look at, but gimme a nice, firm arse attached to a stunning blonde backpacker any day.

Walking along Qianhai Lake at night is quite beautiful. It’s surprisingly peaceful for Beijing, and the lights across the water are lovely. There are lots of restaurants and a few nightclubs (complete with prostitutes), but I was as tired as the only sheep on a Kiwi’s farm, so the drinking and dancing will have to wait till tomorrow. 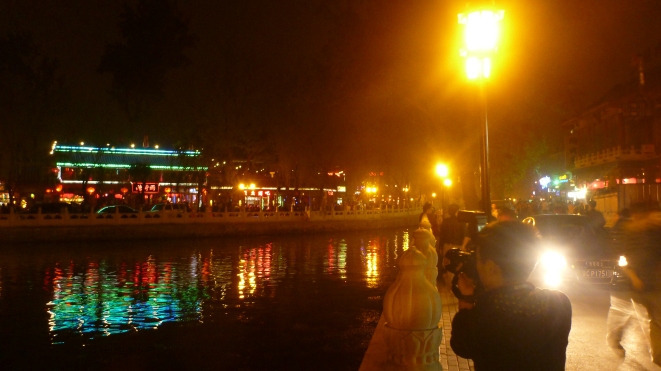 And that, right there, was a day as full as a fat chick’s shoe.

Originally written April 30, 2012, which was International Kiss a Koala Day.