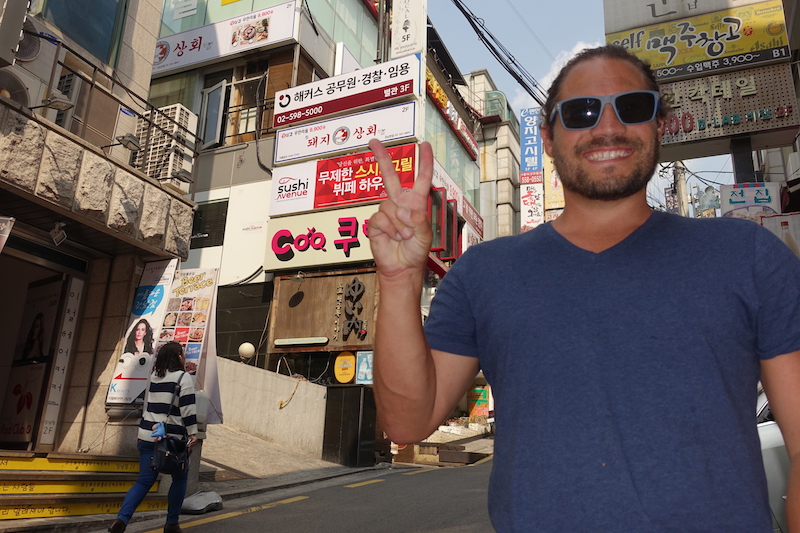 Ever since I first saw that dickhead in the Gangnam Style video, I’ve wanted to punch his head in, so when I discovered Gangnam is a real place in Seoul, I decided to head there and throw him into an open sewer. Tragically, I didn’t find the dancing dork, but I did find endless alleyways full of restaurants serving noodles, fish, crab, nachos, steaks, and anything else you can imagine. Neon signs, inflatable cats, little dudes on delivery motorbikes, smiling Asians, traffic jams, pop music and weird shit by the truckload, Korea is a hell of a place.

I strolled down meandering streets, dodging giggling schoolgirls and fat blokes in oversized sunglasses, checking out astonishingly high skyscrapers and scurrying past towering slums. I somehow found myself at the Olympic Stadium, where the Games were held back in 1988. That was the year Noodle Eating, Dancing to Crap Music and Who Has the Smallest Penis? were Olympic events, so it should come as no surprise that South Korea did really well that year.

I took a few photos of the outside of the Olympic Stadium, but when I saw some bloke stroll straight in the front doors, I followed him. I was met with a labarynth of old-fashioned coridoors as I passed the headquarters of Korean soccer, Korean basketball, and Korean AFL (just kidding, but ask a Victorian and he’ll tell you Korea’s five years from going singlet soccer mad) before finally finding myself in the middle of the stadium where Debbie Flintoff-King won the 400m hurdles. It was weird and deserted, a world away from the photos and videos I’ve seen of it during the ’88 Olympics. Then a security dude started yelling at me and I hoofed it out of there in a time that Debbie would be proud of.

I was feeling absolutely famished, so I was stoked to find a shop selling Dagwood Dogs. Being Korea, I suspected that the name’s probably taken more literally than it is in Australia, but I was hungry and they looked good, so I ordered a couple. I had to stop the sheila behind the counter from dipping them in sugar, which is tantamount to marrying a supermodel and then making her wear a burqa, then sat down under a bridge to eat them. They were actually really nice, but a little bloke kept laughing at pointing at me while I ate. After a few minutes, he wandered off to the shop and bought one of his own, then came back and demonstrated the Korean way of eating a Daggy. He sucked the batter off it using a technique that Jesse Jane would be proud of, then licked the sausage and ate it in one bite. I was weirdly aroused and had to leave.

When I finally escaped, I could hear music blasting from a nearby stadium, so I strolled over to have a gander. What I found inside was unlike anything I’ve ever seen, and really pretty special. Some dickheads were playing basketball in there, but that’s not what made it so cool; the arena was full to the brim with thousands of cheering Koreans, some in red, some in blue, and every single one of them was going mental. I’d stepped into the annual Korea University vs Yonsei match, which is one of the biggest sporting events on the Korean calendar. Each team had their own four-piece rock band blasting fight songs out to the crowd, as well as two sets of fully decked out superheroes who bopped around on top of stages, while fireworks and jets of steam shot throughout the place. I’ve been to some big footy games in Australia, but nothing even comes close to the atmosphere I experienced in there.

Alright, I lie. Cowboys vs Eels on a wet July night probably eclipses it.

I ended the day with a walk along the Han River, which would be a lovely stroll if they hadn’t built a fucking six-lane road between the bank of the river and the water. A few thousand cars a minute wasn’t going to stop me having a good time, though, and when I found a bizarre outdoor gym populated by mask-wearing geriatrics. The equipment is really wacky, with the fogies doing oddball activities such as humping poles or spinning big wheels. It obviously works, because there aren’t many fat cunts in Korea, but it also looked like a scene from the world’s worst porno movie, so I got out of there before they could drop their trousers.

As I was walking home, I found a hula hoop and, overcome with the pulsating athletic atmosphere of Seoul, I picked it up and started spinning it on my hips. I was a bit shit at it, though, and after being laughed at by a bow-legged Asian in a shirt that said ‘What Make Fuck!’ I threw it in the river and went home to have a beer. You can’t win ’em all.