If you’re thinking of coming to Tallinn, Estonia, drop everything (except if you’re holing a baby) and do it. Just don’t come on a Monday, because most of the attractions will be closed and you’ll have to do what I did – get drunk and make your own fun.

Actually, I’d recommend doing that no matter what day you’re here. There’s no better way to explore a strange city than with a cold beer in your hand.

I had my heart set on seeing the Seaplane Harbour maritime museum in the east of the city, so set off in that direction with a smile on my face and a song in my heart. On the way I passed the St Olaf’s Church (dunno who the fuck Olaf is, but I bet he’s got a beard), which promised a delightful view for the bargain-basement price of two Euro Spacebux, so I trotted inside and looked around for the elevator.

“You must walk up,” said an older lady with a smile. And then, under her breath, “You look like you could do with the exercise.” I don’t know why she would say that in English, rather than Estonian, but it’s my story so it’s what she said.

The viewing platform is apparently at the 62 metre mark, but let me tell you, it seems higher than that. The staircase is steep and dark and winding, and I was huffing and puffing like Chrissie Swan on a treadmill by the time I reached the summit. It was all worth it, though, because the view is outstanding. While the walkway around the edge of the steeple is as narrow as David Gallop’s penis, which makes it difficult to relax up there, you won’t find a better view over the rooftops of this ancient city.

I made it out to the maritime museum but, unlike my ex-girlfriend’s legs the second some cunt who isn’t me walks by, it was closed. Apparently all the museums in town shut up shop on Mondays, for some reason that surely only makes sense to Estonians, so I was left with two options – get on the turps, or sit around with a frown on my face and my pecker in my hand. I found a supermarket that sold beer, and I was on my way, skipping through Tallinn on a spectacular day. 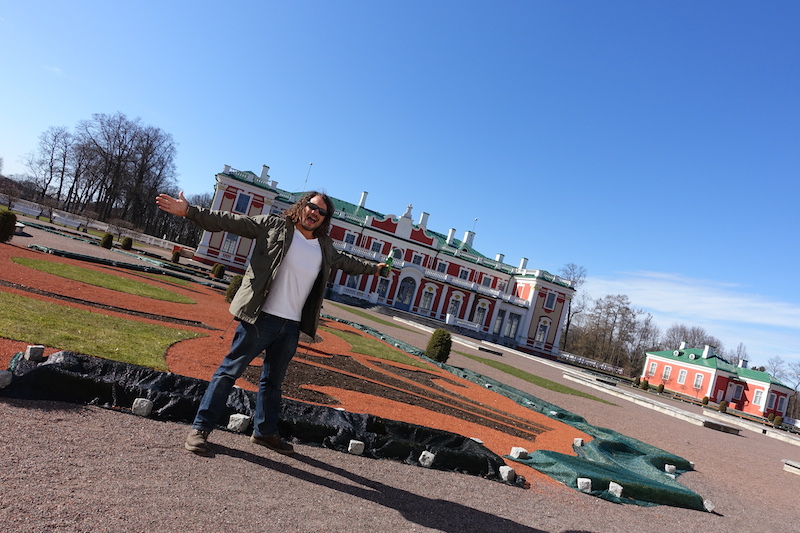 On my travels I stumbled upon some weird-as-fuck concrete behemoth called the Patareisadama piiripunkt. I don’t know what that means, and I don’t know anything about the building other than the fact it looks like something out of a Soviet nightmare. It might’ve been ferry terminal at some point, but with its criss-crossing concrete bridges and stern concrete walls covered with graffiti (and probably wee), it stands as a reminder of darker times. 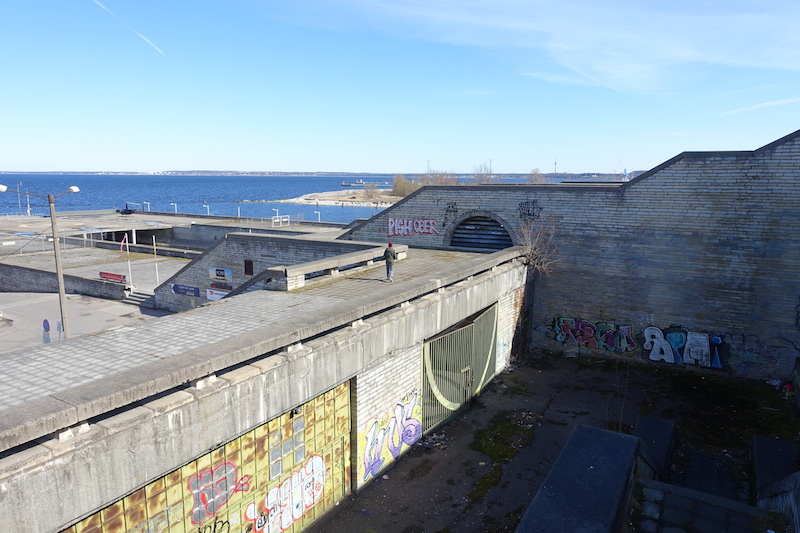 It’s been a week or so since I’ve been to the beach, and Tallinn’s by the water, so I decided to stop by one of Estonia’s most beautiful beaches to pull a few rays. It was a sunny day, so I couldn’t work out why no-one else was splashing about by the water. Well, the fact it was about eight degrees probably had something to do with it, but that didn’t stop me stretching out for a relaxing afternoon in (what passes for) the sun.

Things went tragically wrong when, full of grog, I decided to do some handstands. The booze flowing through my veins obvious affected my balance, and I fell onto an elderly lady’s dog. Fortunately the dog wasn’t injured, but it bit me on the leg, and then the lady started hitting me on the head with her bag and shouting. I can only assume she was yelling, “Rape! Rape!” because a number of tough-looking guys ran out of nowhere and started snarling at me in some weird language. I figured they weren’t asking me my shoe size, so I did the only thing I could think of – I threw sand at them and ran away into a park, where I hid under a pile of leaves until the stopped looking for me.

When I emerged, I found myself out the front of the world famous Kadriorg Palace, which is definitely very pink. After my ordeal, I simply sat in the sun, on a bench between an old Estonian woman with a scarf wrapped around her head and a duck (I mean the duck was on the other side of me – the old woman didn’t have a fucking duck wrapped around her head) and enjoyed the pinkness of this special place. And then, when the banality of life beat me into submission, I decided to indulge my massive love of pot.

Beer of the day:
I found AC/DC beer! I wasn’t able to buy any because they didn’t have any coldies, but this one gets the gong by virtue of having something to do with Acca Dacca. To those about to drink until they pass out in an Estonian back alley we salute you!

Kebab of the day:
I was starving as I waltzed into Istanbul Kebab, so I was very upset that it took them about 45 minutes to prepare my Adana kebab. Their hot chip machine was on the fritz, but they made up for it with a free beer and a cracking meal. An Adana kebab is apparently a few sausages, a bunch of chips, and a heap of salad, so I can only throw my hands in the air and admit I don’t have a fucking clue what the definition of a kebab is anymore. It was delicious, though, so who gives a shit?

One thought on “Welcome to Tallinn, where nothing’s open on a Monday!”