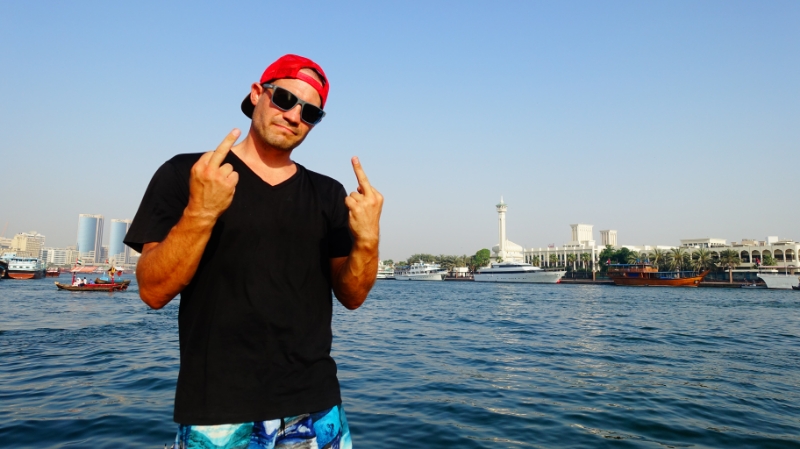 My plane touched down in Africa just as the dirty orange sun was slinginging itself over the nearby skyscrapers, and proceeded to battle jetlag as I battled the crowds onto the train that would take me into the heart of the city. As it sped through modern buildings and past beautifully-manicured gold courses, I couldn’t help thinking that this place doesn’t look like the Africa I expected.

After getting off the train, I was even more confused. Expensive cars were cruising along the streets, planes and helicopters were zipping through the sky, and I couldn’t really see any black people. Sure, there were plenty of blokes with good tans, but none of the Laurence Fishburne-types I’d seen in photos. Then it hit me; no famine, no disease, modern archicture – I wasn’t i Africa! I must’ve had one too many complimentary beers on the flight and gotten off at the wrong stop!

Never one to let something like that ruin my day, I swaggered up to a bloke sitting in the back of a banana truck and asked himself where I was.
“Hello my friend, I am Farooq,” he said in a thick, velvety accent. “How may I be of service?”
“Yeah mate, two questions. Can I get a beer, and where the fuck am I?”
“You are where you are meant to be, my friend,” he replied, whilst clearing away some bananas so I could sit down.
“That’s great, very philosphical, but which city specifically?”
“Dubai, my friend, and Farooq will give you a tour of the most wonderful sites.”

Farooq looked as trustworthy as a brown snake and twice as slippery, so I wasn’t too keen on the idea of him leading me down some back alley to be murdered. But before I could say no he’d jumped out of the banana truck and grabbed my hand, squashed banana oozing between our entwined fingers.
“Where you want to go first, my friend?” Farroq asked, his face so close to mine that I could smell the stale tobacco and fresh banana on his breath. “Burj Khalifa? River tour? Maybe we get AK-47 to take down the infidel?”
I wrenched my hand from Farooq’s grasp and spun into the streets, envisioning an epic chase through downtown Dubai. Instead I turned back to see Farooq sitting on his arse after slipping on a banana. How poetic is that?

Dubai is best known for its awe-inspiring skyscrapers, gigantic shopping centres, massive man-made islands and other tourist attractions, but I decided instead to head towards the city’s Old Town, to get a better feel for the history of the place. Scattered along the Dubai Creek, this part of the city has plenty to see and do and is a hive of activity. From mosques to museums and souqs to sewers, it’s certainly a more authentic Arabian experience.

A highlight of my hike was a trip across the Creek in an abra, which is a traditional wooden ferry. For the massive price if one Dirham (about 36 Aussie cents) I got a great view of the bustling city. Being a tourist destination, there are plenty of little blokes trying to sell expensive river tours, but my advice is to save the money and hassle and just take an abra.

The food in Dubai is also worth noting, because it’s exceptional. The huge Indian and Filipino communties mean there’s no shortage of exotic (and cheap) food, and it’s everywhere. The streets are lined with curries and samosas, and I’ve been stuffing my face with all sorts of samosas and strange kebabs. The best thing is that walking about in Dubai’s extreme heat means that you can eat whatever you want and not put on any weight.

So far, Dubai has been completely different to anywhere I’ve ever been before. With sand everywhere it’s obvious I’m staying in a desert, but the ornate gardens are completely at odds with this. The ethnic mix is both strange and fascinating. The clash of old and new is jarring at times. Dubai sometimes feels fake and soulless, and at other times ancient and full of life. I’m planning to check out the other side of the city tomorrow, just as long as bloody Farooq doesn’t put a fatwah on me!