Ljubljana is a bloody hard name to pronounce, and it’s not a destination you’ll find in a whole lot of travel guides, but it is a lovely little (and I mean little) city that is worth being drunk and jobless in. I should know, I just spent a night there.

There aren’t a lot of sights to see in the Slovenian capital of Ljubljana – there’s a bridge with dragons on it, and three bridges that are really close together – but it’s a wonderful little place to wander around. Nowhere in the centre of town is more than a few minute’s walk away, everything of importance is right next to a river, and there are bars and restaurant and cafes everywhere. It’s basically a Greatest Hits list of every European city, but smaller and easier to explore.

The most notable feature of the city is the massive fuck-off hill in the centre of it, with a castle on top of it. There’s a little train than runs up the side of it, but I just walked up the bloody thing, which is a nice adventure in itself. There are trees everywhere and the view from the top is sublime, but don’t bother paying to go into the castle at the top – it cost seven Euro spacebux, and there are better views elsewhere on the hill if you look around. Fuck, I even found a place to crab dance!

Lju… oh, fuck it, I can’t remember how to spell it. Anyway, this place is becoming increasingly popular with world famous celebrities, so it came as no surprise that I bumped into popular Aussie comedian Carl Barron, who was walking through the streets with his young son. When I trotted over to say G’day, Carl took one look at me and said, “Shit, now I’m only the second funniest Aussie in Slovenia” and gave me a high five!

One thing that needs to be pointed out is how good the street food is here. You’ll never have to go far without finding something to stuff in your face. I’m talking about kebabs and burgers and stuff like that, but they’re all cheap, delicious, and huge. Sorry, I thought I was talking about my ex-girlfriend there!

Despite being a capital city, Ljubljana only has around 250,000 people, so it really does feel like an overgrown country town. There are no trams zipping through the streets, and not many cars. Life’s a bit slower, which makes it a fantastic place to relax. There are even dickheads riding through the streets on fucking tractors! I’m sure if I looked around I would’ve found a hillbilly rooting a chicken.

I was in Ljubljana on a Saturday night and Sunday morning, and the whole place was full of life the whole time. Bars and restaurants were full to overflowing during the night, and there were bands and entertainers all over the place during the day. It would be a great place to visit for a few days if you had someone to sit by the rivers with, drinking good beer and talking shit, but seeing as I left my pretty girl in Riga, one night is more than enough for someone on their own. 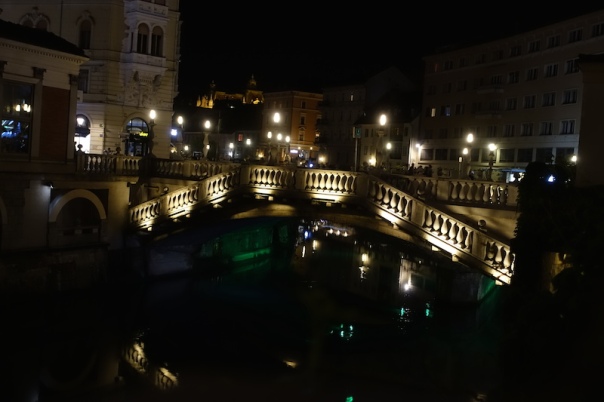