And so, after spending many lifetimes in Europe, I find myself in Sri Lanka. From the frozen tundra of Estonia to the white peaks of Slovakia, and the rocky peaks of Montenegro to the clear blue waters of Greece, now I’m surrounded by palm trees, curry, and annoying little men trying to sell me shit even a complete dickhead wouldn’t want.

The humidity hit me as soon as I stepped off the plane, walking through the night along a runway lined by palm trees, towards a place I thought I’d never visit. I passed customs like I pass ex-lovers, and stepped back out into the Colombo night. Unlike my first steps into India a year ago, however, the culture shock was not severe. There were no swarms of people trying to rob me, just a nice little dude with my name written on a sign and a cup of tea waiting for me in his car. That sounds a bit like I was being abducted, but it was all quite innocent – he was just taking me to my hotel.

“I was expecting a Sri Lankan gentleman,” he told me as I loaded my bags into the car.
“Sorry to disappoint,” I replied, “but I’m sure you can find one or two of them around here.”
“Rowan is a Sri Lankan name. Very popular. My son has this name. The man who lives next to me has this name. The man who cuts my hair has this name, and so does his boyfriend… oh, I forgot to introduce myself. I’m Rowan.”
How’s that! I travel around Europe for two and half months and no fucker knows how to pronounce my name, I get to Sri Lanka and I’m just one of the boys.

It is very different here, though, obviously. Greece was hot, but had nothing on Sri Lanka. It’s close to 40 during the day and humid as hell, so a stroll down the street had me sweating like Casey Donovan opening a Mars bar. Beers stay cold for about four minutes before becoming warm sludge. I’m staying in Negombo, which is a short trip from the capital, but it’s still pretty quiet and relaxed. A little too quiet, actually, because the restaurants are empty and there’s not a lot to do. I’m right on the beach, which is wide and sandy and covered in a modest amount of garbage. It’s pleasant, if not beautiful, so I’ll head down south to find the good stuff (hee-haw!).

While it’s a peaceful place and I don’t feel like I’m in danger, there are signs of poverty everywhere. Dudes with no legs drag themselves down the street while tuk-tuk drivers desperately beg for their only fare of the day. It’s a poor place, but still has a good feel to it, even if tourists (and their dollars) are few and far between. It’s definitely not a place to rock up to if you want to go to a discoteque full of handsome European men (trust me on this one).

I was wandering along the beach, watching the sun sink into the azure ocean while little kids knocked a cricket ball around on the sand, when I noticed a man sitting on an upturned boat. He stood out because he was white and boasted an ample gut, and when he gestured to me, I took a gulp of my beer and headed over. Maybe this was the person I’m supposed to meet while in Sri Lanka (I hope not), or he’ll point me in the direction this adventure is to take me (that would be better). When I made it to the boat he looked down at me, extended his hand, and said, “I’m Ian.”

There haven’t been a lot of great men named Ian. Former Roosters player Ian Rubin. Hat-wearing gay man Ian ‘Molly’ Meldrum. Moustache dude Ian ‘Turps’ Turpie. It’s hardly a name that has changed lives, and the fact he lisped it at me in a voice that could’ve belonged to a schoolboy didn’t fill me with confidence. He told me to climb onto the boat with him and, with the spirit of adventure in my heart, I did just that.

“You’re on an adventure, and it’s just getting started,” Ian squeaked, looking out at the red-hot sun. “Tomorrow is when everything changes, and you find your destiny.”
“And what’s that?” I asked, filling with awe quicker than a cup fills with water when left out in the rain.
“I see the ocean,” he replied, gesturing wildly.
“So do I, mate, it’s over there, about five metres away.”
Ian went quiet, as if I’d hurt his feelings. I apologised and took another swig of my beer as he sat there, his white hair fluttering in the gentle breeze. “I mean, I see you sailing across the ocean, seeing things you’ve never seen before, experiencing things you’ve never experienced before.”

I didn’t think my adventure to Sri Lanka was going to take me to the ocean, but if that’s where it takes me, that’s just the way it is. “How do you know this?” I asked.
“I can see it in your eyes,” Ian said, looking not at me but at the children playing cricket. “Tomorrow, you go out on the ocean, and there’ll you’ll see something amazing.”
“Shit, what will I see?”
Ian shifted on the boat and looked at me dead on. “You’ll see world unimaginable, life-altering scenery and more fish than you ever thought possible. You might even find the missing part of your soul. The cruise includes a seafood lunch, fruit, and drinking water. It costs only 3000 rupees and leaves from here at 9am. What do you say, are you ready to meet your destiny? I’ll need the money now.”

I was thinking about pushing Ian off the boat, when fate took care of it for me. One of the kids smacked the cricket ball our way, and when Ian tried to catch it he toppled backwards, falling a few metres to the sand with a thud.
“Sorry Ian, you’re dropped,” I smirked, as the young cricketers swarmed around me and started slapping me high fives and calling me a legend.
I’ve only been in the country a few hours and I’m already a hero of the people – at this point, it’s all in a day’s work! 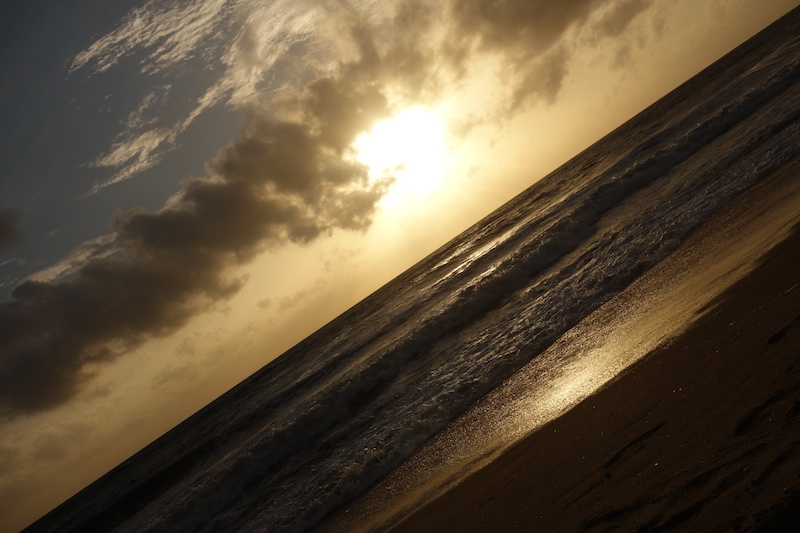