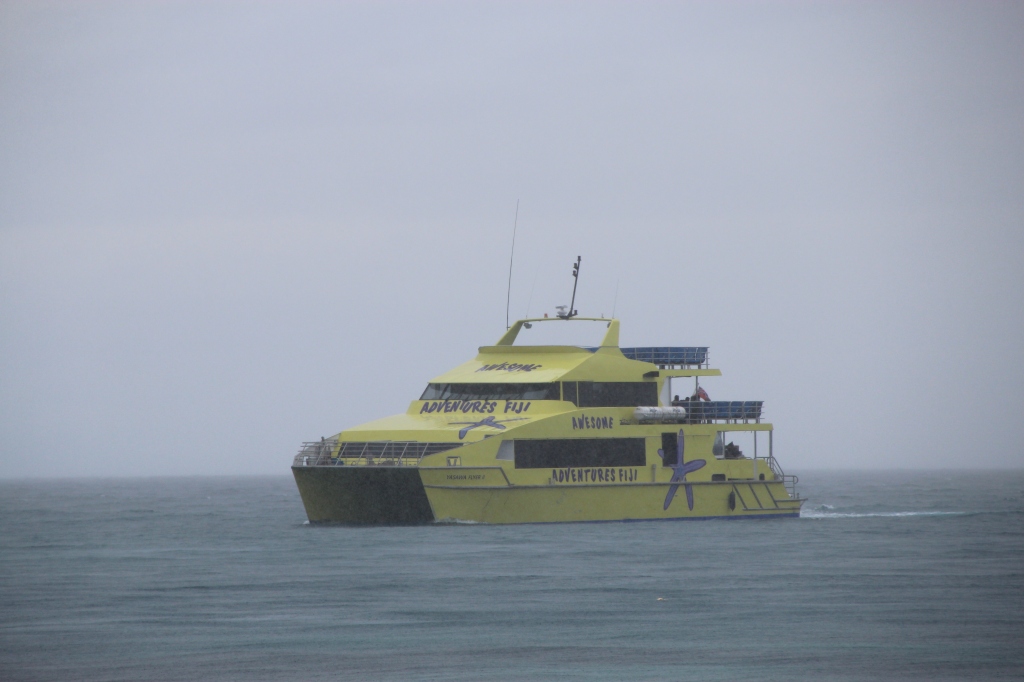 My final morning on Fiji’s Yasawa Islands was as wet as a fat girl with a bag of Doritos, so I sat around like a beached jellyfish until a big yellow boat came and took me back to the mainland. While I enjoyed my time there, the escape couldn’t come quick enough – the weather was a real bummer, and I was sick of being around the same people all the time. Halfway through a game of beach footy it rocked up, and I was out of there.

The three-hour ride back was uneventful, but that was only the start of my journey. I was booked in at a hotel in Suva, on the other side of the country, and had no transport booked for the trip. We got into Denerau Island just as it was getting dark, and everyone else soon disappeared to nearby hotels. I was left alone, and asked a random woman at a desk if she could help. She told me that, of all people, the captain of the boat I’d just been on was going to Suva, and I could tag along with him. I was saved!

I had to wait around Denerau for a while, and it’s a joke of a place. Western shops filled with fat white idiots, off on exotic holidays with every speck of exoticness squeezed out. It might’ve been Sydney or something, because it sure as hell didn’t represent anything Fijiian. I just don’t get the point of going on a holiday like that – why not save yourself the hassle and just stay at home with a beer in one hand and yourself in the other?

The Captain (who was named Fabriatore! Seriously, Fabriatore the Fijian boat captain!) and I took a chauffeured car off the island, but that was as luxurious as things got. The car drove us through the shit-sty that is Nadi, before dumping us in a dark alleyway full of very large black men. It felt like the opening scene of a dodgy gay porno, and I was genuinely scared as I got my bags and then packed them away in an ancient red minivan that looked like it could barely make it across the street, let alone across the country. Of course we had to wait around another half hour or so, and I was shitting myself every time a shadowy figure walked past. I’d put all my trust in a bloke who claimed to drive a boat, and now I was in a potentially very dangerous situation.

The Captain handed me a curry wrap that I scoffed despite knowing it would probably see me painting the inside of my undies brown before long, then we got the call and piled into the minivan. I was relieved to be out of a dangerous situation – for about three seconds. The van had no suspension and appeared to be held together with stickytape and prayers, and there was twice as many people in it as could possibly be safe. We rattled and rolled for a few kilometres, until we stopped and three more people climbed in, including a handsome Indian man who sat on my lap.

His name was Vijay, and he wouldn’t shut up about the power of the mind and other bullshit like that. He was a harmless bloke, but if I wanted an Indian dude bouncing on my lap I would’ve gone to one of those special clubs on Oxford Street, so I was happy when he got off. Like, off the bus – I don’t mean he had an orgasm. Well, maybe he did, who knows.

Ten minutes down the road there was a loud bang and the van lurched violently to one side. The driver and the two blokes next to him got out, swapped over one of the wheels, and we were rattlin’ and rollin’ down the road again. We crept along some truly atrocious roads, then there was a loud crash as the van shat itself while trying to make it over a speed bump. The driver and his two mates – who, I assume, were only there to help fix the car whenever it died – got out, banged around for 15 minutes, and then we crept into the night. It was absolutely ridiculous, and terrifying, to be in such a shoddy vehicle, speeding through the rainy night.

After five hours of stupidity, we finally rolled into the beautiful city of Suva. Right, that’s a lie – you could replace the ‘v’ in Suva with a ‘w’ and have a pretty apt description of the place. After getting out in the middle of a swarm of the dodgiest dudes you’ve ever seen in your life, The Captain and I jumped in a taxi and headed off again.

“If you don’t want to stay in a hotel, you can sleep at my house tonight,” Fabriatore the smiling Fijian sea captain told me, and I just nodded. I’d heard that people on the islands are more than happy to offer a bed to strangers, but I didn’t want to put him out any further. When I checked into the hotel, said goodbye and thanked him for all his help, he seemed genuinely upset that I hadn’t taken him up on his offer. I hope that I didn’t offend or disrespect him, because I’m truly grateful for his help. Next time, Fab.

The reward for my nightmare trip was a room in what’s either a flop house or a crack den. The exotically-named City Private Hotel, is horrible – my room is decorated with peeling paint, rat shit and a pair of undies in the corner. I just looked out the window to see a child wandering through the hallways alone, covered in crap. I can hear someone getting punched in one of the other rooms, and two blokes rooting each other somewhere else. The curry wrap has finally kicked in, and a few minutes ago I sprayed the toilet with electric orange splatter, which probably doubled the value of the joint. Oh well, things are definitely looking up, because tomorrow things slow down as I head to the magical land of Tonga. Now it’s time to go to sleep, and I just hope a rat doesn’t shit in my mouth during the night. 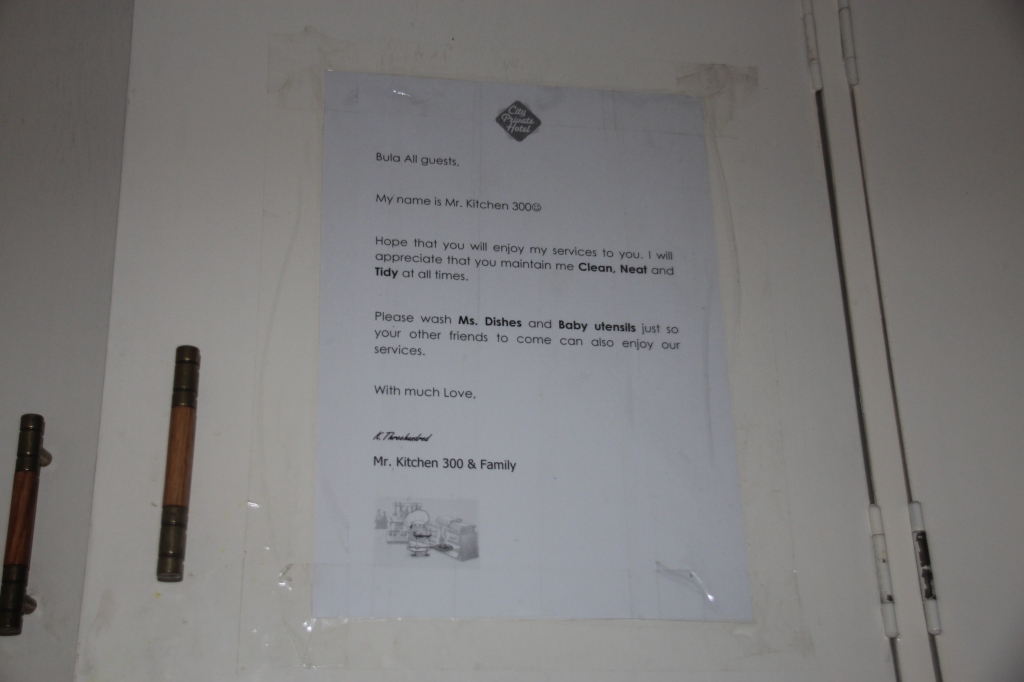 I’ll be taking a break from posting stories of my 2013 adventure to Samoa, Fiji and Tonga, and for a good reason. I’m heading to Tasmania for a week and a half, so I’ll be blogging every day about my travels through Australia’s most inbred state! And tomorrow, I’ll be putting up a very special story about the time I went to jail. So join me as the Bauer World Tour takes me to Hobart!