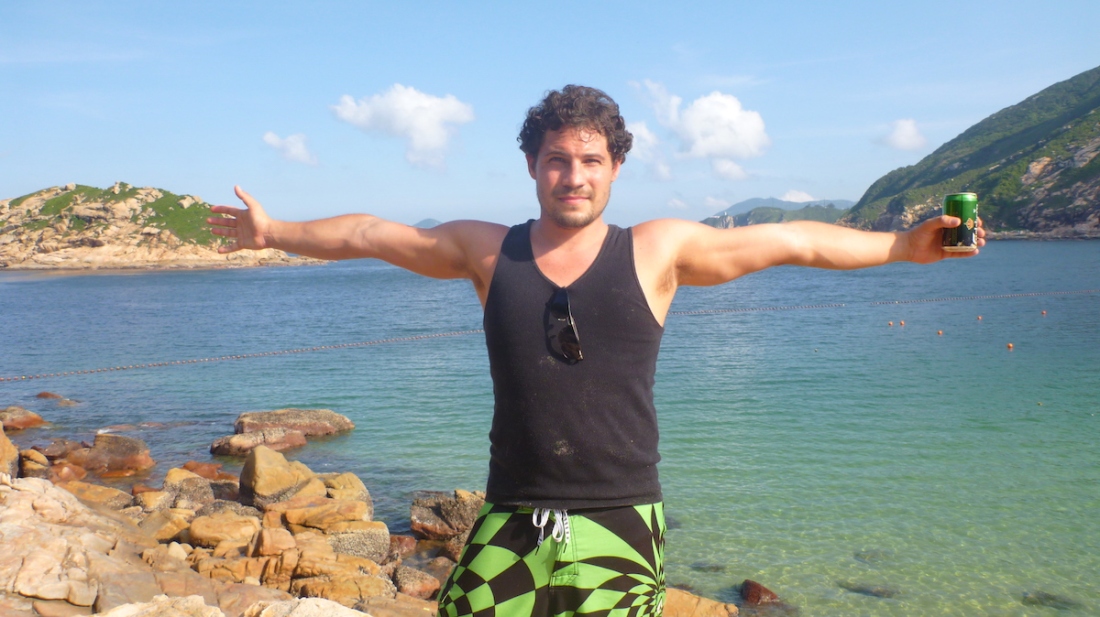 After spending the last week really, really wanting to go to the beach, today I, uh, went to the beach. I used the internet for something other than searching for videos of fat people falling over and discovered a little place called Shek O, not far out of town on Hong Kong Island, and caught a bus out of there. And it was amazing! The beach was one of the best I’ve been to, with clear water and golden sand that gives way to a gigantic green mountain on one side of the beach. Surrounding it are little shacks and there were very few people there. It was like a little beach in Thailand, and a world away from the city I’d escaped.

So that’s how I spent my day – reading on the beach, splashing about in the water, sleeping, and drinking cheap tinnies on the sand. It was incredibly relaxing and exactly what I needed after being overwhelmed by how busy most of Hong Kong is. It was actually quite surreal to be so close to the most densely populated place on Earth and basically have the place to myself.

Around 2pm, a very fat man put his towel down next to me and stripped down to his board shorts. I raised my beer to him, and he introduced himself as Professor Tatsuya Yamamoto, Japan’s foremost expert on centipedes. He seemed like a nice enough bloke, but I left him to himself, because he obviously needed a break from discussing centipedes or whatever it is he does. And then along came Wang.

Wang was a skinny little Chinaman in a pair of dick slickers that hung halfway down his arse, so they covered nothing. He knelt down behind Tatsuya and, to the big bloke’s surprise, started giving him a massage.

The professor didn’t know what was going on, but Wang got out some suncreen and started rubbing it onto Tatsuya’s bulbous body, saying things like, “Your body is so beautiful that Wang would never be able to forgive himself if even one centimetre of it became burnt.” I’ll need to remember that line.

Then he pulled out a tiny g-banger and ordered Tatsuya to put it on. The professor was speechless but did as he was told, while Wang cheered him on.

“Now Wang take photo of you,” said the pervert, and a clearly upset Tatsuya stood there giving a big thumbs up.
“No, no. You sexy man. You get into sexy position for Wang,” said the sicko, and before I knew it poor old Tatsuya was bending over spreading his legs while Wang fiddled with his zoom lens.

I went to get another beer, and when I got back, the boys were gone, and all that was left was a bottle of sunscreen and a book on anthropods. I can only assume that Tatsuya is now imprisoned in Wang’s rape dungeon, thus robbing the world of vital information on centipedes.

As the sun slid behind the mountains I went for one last swim, then dropped in at a little Thai restaurant over the road for one of the best meals I’ve ever had. It was just a green curry with a side of spring rolls, but it was nothing short of abso-fucken-lutely delicious. I topped it off with four bottles of Singha, then wobbled off to catch a bus and two trains back to my mansion in Kowloon.

I took a quick stroll around town to see what was going on – there was the usual assault of neon and people and music and traffic – then picked up a few cans of beer and returned to the sanctuary of my room. The city parts of Honkers might be a bit too much to take in at times, but bloody hell, that Shek O goes alright.

I originally wrote this on May 7, 2012, which is known as May Day in most countries. Alright, only in Equatorial Guinea, but that’s the only country that matters.