Another day, another amazing place to visit. Well, I guess I’ve gotta even out all those days I’ve spent in cesspits like Huddersfield and Jakarta. Today I went for a stroll around the Plitvice Lakes in Croatia, and they put on a bloody good show for me, and pretty much made yesterday’s epic 10-hour, three-bus journey from Bled worthwhile. 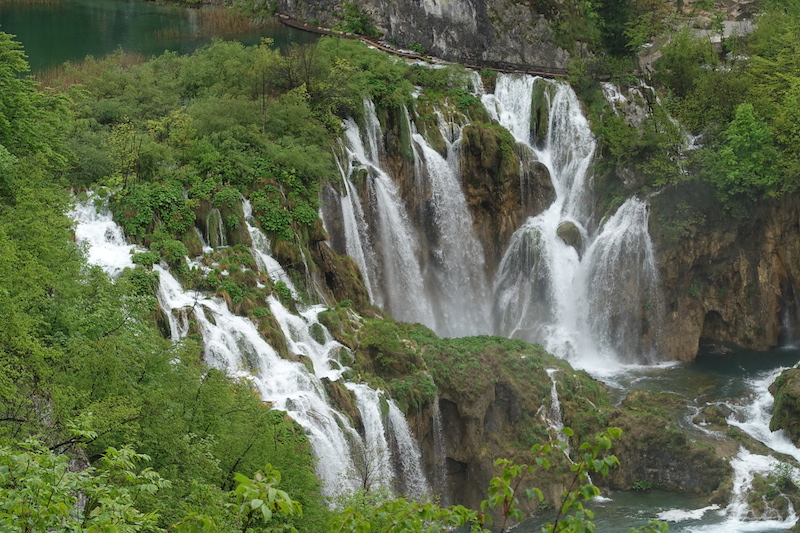 Plitvice is in the midle of nowhere, and the only reason anyone would ever come here is to visit the National Park. And what a park it is! As soon as I swaggered through the front gate, flashing smiles at pretty girls and flexing my muscles, I was greeted by a series of gigantic waterfalls, emptying out into a bright blue lake. It made the 110 Croatian Carona (that’s something like 15 Euro Spacebux) asking price feel like less of a rip off.

I was a bit pissed off I bought a ticket to get into the place, actually, because I didn’t need one to get into the park and nobody checked if I had one. So there’s a travel tip – just walk into the bloody place and spend the money you saved on good Croatian beer and bad Croatian prostitutes!

The Pensioner Patrol was out in force again, with hundreds of the wrinkly-faced codgers shambling about, complaining that it was too cold and trying to take photos with their television remote controls. Fortunately, most visiotrs to the park check out the first few waterfalls and then catch a ferry to the southern end to see the rest. That means that the delightful walk along the lake between them is completely deserted – and provides half an hour or so of peace and quiet from the crowds.

While the waterfalls at the top of the park are pretty cool, it’s the wet bastards at the bottom who are the real stars of the show. While not as big as the first ones I saw (and who says size matters? Well, most of my ex-girlfriends, but that’s a story for another day), the way the track winds between dozens of waterfalls makes it an awe-inspiring sight.

Wooden walkways weedle through the gorge, while the clearest water you’ve ever seen cascades from the heavens. The sound of the torrents is all-empassing, with water tumbling down from every direction. It might sound weird, but it  doesn’t really look natural – the whole things is so perfectly set out that it looks like a movie set, or a theme park attraction.

One bloke who was really enjoying himself was Nagasaki, a Japanese fella who is over here while taking a break from producing microchips for Toshiba. Actually, I dunno if any of that’s true, but let’s run with it. Anyway, Nagasaki was really enjoying taking photos, filling up 32gb cards by the minute, capturing every waterfall from every angle. He didn’t want anyone getting in the way of his shots, though, and kept yelling at people to get out of the way so he could take another photo.

Nagasaki was trying to take his 45th shot of the same waterfall when a group of pensioners in brightly-coloured shirts got in the way. He started yelling at them to move, when one of the fogies took off his hate and stormed up to him.
“You’re asking me to move?” he yelled in an American accent.
“I take photo, you in way,” replied Nagasaki.
“I thought I killed you in ‘Nam!” spat the codger, before sticking out his tongue and waving his hands around in front of Nagasaki’s camera.

Oh, and I saw this stupid fucking lizard thing, which kept trying to climb up a small hill before tumbling down! It was like me trying to do anything after having 18 beers and a pizza.

The whole place was so beaut that I shot about a thousand photos, and then promptly kicked my camera off a cliff while trying to take a photo of myself in front of a waterfall. But don’t worry, I won’t be illustrating furture blog posts with doodles I made on napkins, because I’ve got a back-up camera (and travel insurance – fuck yeah!).

Tomorrow I’m heading to the dream tourist destination of Sarajevo. Fucked if I know why I’m going there, I booked it when I was drunk. Honestly, I could be lying on a beach somewhere, and choosing to go to some place where I’ll probably be shot and eaten. If you don’t hear from me again, I hope I at least don’t taste nice.

4 thoughts on “I went chasing waterfalls”