Zimbabweans hate Zambians, and Zambians hate Zimbabweans, and it’s all because both countries claim to provide the best view of Victoria Falls. Having explored the Zam side yesterday, and visited the Zim side today, I can say that the best plan of attack is to see both sides in order to get the whole picture and experience as much of these incredible waterfalls as possible. But if you’re only in town for one day, I’d suggest heading to the Zambian side, because it offers more variety and a lot more monkeys. It’s a controversial opinion and I’ll probably be run out of Zimbabwe by Robert Mugabe for saying it, but there it is. Shit, if I keep up the helpful advice, Drunk and Jobless will start looking like a proper travel blog or something.

The big plus for the Zim side is that it offers a spectacular walkway that winds its way in front of the Falls for a kilometre or so, which gives a greater appreciation for the size of the thing than the Zam side. It’s a wet and wild trip, with the spray from the Falls cascading down in a torrential downpour reminiscent of a summer day in Melbourne. Don’t saunter through there with your winning Lotto ticket poking out of your back pocket is what I’m saying.

The Zim side has fewer walking trails, and doesn’t offer a way to walk to the bottom of the Falls. I was hoping to find a spot that allowed me to look up, rather than across, at the behemoth, because I think that would be even more incredible than what I experienced. In saying that, the views I had today were absolutely spectacular, filled with rainbows, and there’s truly no bad way to see this amazing place.

Of course, if you’re rich as fuck, there are helicopter and microlight flights over the Falls, which would be awesome. But if I had $US150 to burn on 12 minutes of excitement, it would involve a 19-year-old Russian who can put her ankles behind her head, and not some middle-aged helicopter pilot with half his lunch spilled down the front of his shirt. 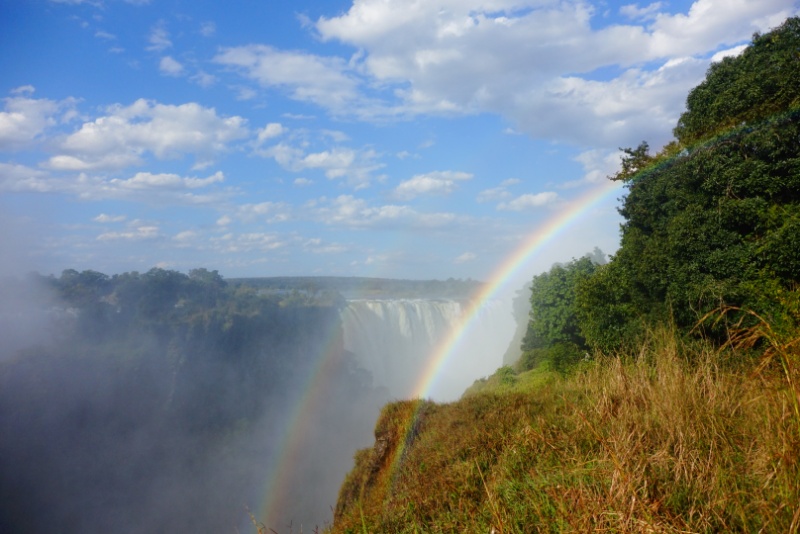 Speaking of shirts, it’s funny how many of the older folk around here (and most of the tourists around Vic Falls kissed their peak mating days goodbye back when the Newtown Jets were still world beaters) get around in safari outfits. Khaki cargo pants, khaki shirts with heaps of pockets, and even those funny little khaki safari hats. I’d hate to break it to them that dressing like a character from Carry On Up The Jungle doesn’t make their 12-day package tour anymore wild.

Oh, and I met some more hilariously-named street vendors! Today I encountered Prince, Honest, Sunshine, Bart Simpson, Mr Excellent, Batman, Super Nintendo, Rainbow, Clint Eastwood, Emperor, Magic, Dude, Handsome Boy, Champagne, Happiness, The Rock, Supreme, Zimbabwe Warrior and Gary. That last bloke sure got shortchanged in the name game. They all wanted to sell me Zimbabwe bank notes (I got one with a Zoo mag years ago – and it’s the only decent thing that shithouse rag offered the whole time it existed), carved animals (the only sort of carved animal I’m interested in is a steak) or ‘the good stuff’ (drugs, apparently. Although if it’s as disappointing as when I offer girls ‘the good stuff’, I’m glad I passed).

3 thoughts on “The Great Victoria Falls (mas)Debate: Zim or Zam, yo?”