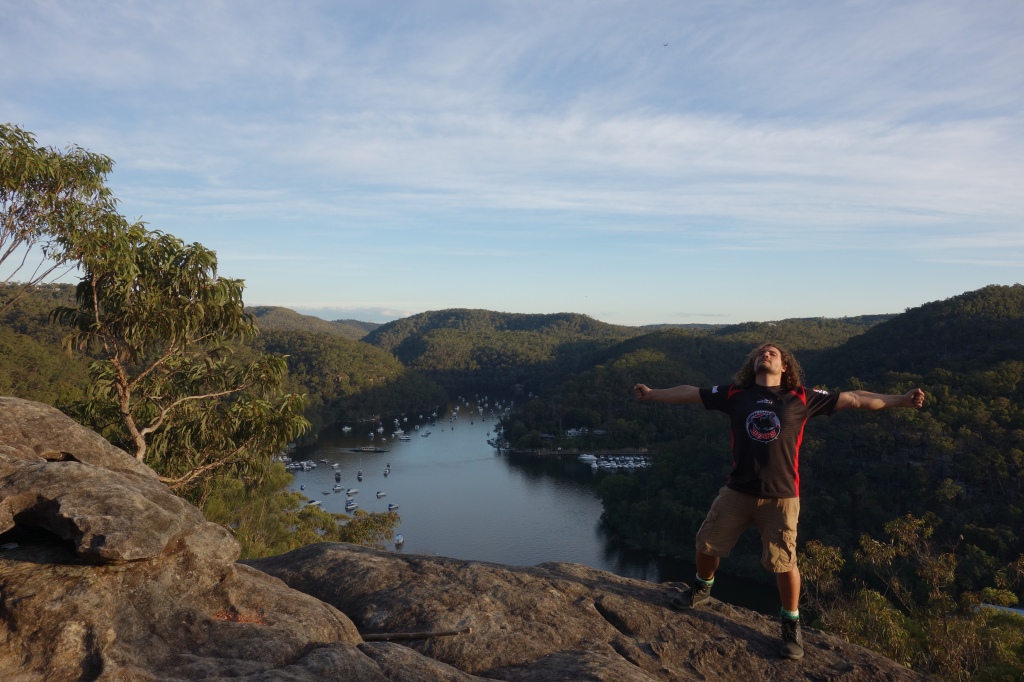 I wouldn’t normally go to Sydney even if somewhere down there was offering free beer and half price strippers, but I made an exception this week – to hike 27km from Berowra to Brooklyn. Alright, so it was the northern outskirts of the city and I didn’t go anywhere near congested streets or idiots in suits, but it was still Sydney, and it was really bloody nice. Let’s take it away!

I trained it to Berowra, headed west and strolled through the back streets and snuck into the Ku-ring-gai Chase National Park like some sort of spy. There were no guards, and I was allowed to go in there, but let’s just say I did it like a spy anyway, because it makes me look cooler. The first couple of kilometres were nothing special, but then I hit the Naa Badu Lookout, which provided a wonderful view out over Berowra Creek.

I wasn’t alone at the lookout, however. There was also a group of Japanese hikers, who were playing a strange game with chopsticks while they ate their lunch (sandwiches, not sushi, you racist bastard). Anyway, one of the blokes held up a fistful of chopsticks, and then the women took turns choosing one, then they would laugh and go over to one of the fellas and link arms with him. Then it hit me – this was basically the Japanese equivalent of when swingers pull car keys from a bowl. Why they were doing it out there in the bush, I don’t know. All I know is that they weren’t at all impressed when I asked if I could join in. Bastards.

The rest of the day’s hike was tough, with plenty of hills to climb, and a few little cliffs to scramble up. But the views made it a bit easier to handle. As soon as I got close to Berowra Creek, with the water shimmering like liquid gold in the dying light, it was a truly magical experience.

The weather was beautiful, and quite hot for a winter’s day. So hot, in fact, that I needed to take all my clothes off to cool down. Even the koalas were embarrassed for me.

I camped at a ridgetop campsite, and was actually able to get a fire started. I cooked up a batch of nachos (eat your heart out, Manu from My Kitchen Rules), put some music on and lay back under a brilliant canopy of stars. It felt as if I was in the middle of nowhere, or a million years back in time, or the only man on Earth. In actual fact I was about a kilometre from the nearest houses and had 4G on my phone.

As is tradition on my walks, I woke up the next day and it was raining. I had 17km of trekking ahead of me and my mother had made it clear she wouldn’t be coming to rescue me this time, so I had to get on with it. This leg of the journey made the previous day’s stroll in the park seem like, well, a stroll in the park. The track was nearly vertical in places, I had to cut through overgrown paths, and the constant drizzle made the whole thing a little bit miserable. The ultimate irony was that I ran out of drinking water early, so despite being soaking wet, I was horribly thirsty.

It wasn’t all bad, though. Jerusalem Bay was truly stunning, with the clear waters of the Hawkesbury River splashing up against the eternal green forest. It was a top place to stop for lunch, and my spirits were lifted again when a happy-go-lucky Chinaman walked past and remarked that, with my long hair and walking stick, I reminded him of Moses. It got me thinking that, if I really apply myself, I could do something great for the world, like leading my people across foreign lands for decades or something. Then I forgot about it and took a photo of myself mooning the camera.

I made it to Hawkesbury River Station just as the train left, so I weedled my way over to the pub to have a cheeky beer while waiting for the next one. The beer tasted so good that I missed the next three trains, but after hiking 27km, I deserved it.

One thought on “One Sleep Till Brooklyn”