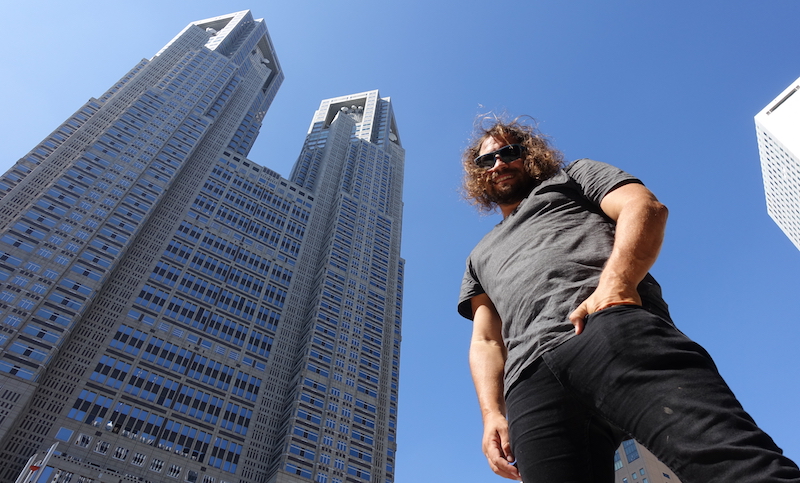 When I came to Japan, I never thought about going to Tokyo, because it got destroyed by Godzilla. But then I got talking to some idiot in a park while I getting to drunk and he told me it was only a movie, and Tokyo’s still there, so I headed over to check it out. Fortunately, the drunk was right, otherwise I would’ve had my head bitten off by a giant lizard. Although, honestly, sleeping in a capsule hotel was probably just as bad.

I wanted to get a good view of the city and see if I could see any hot chicks wandering around, so I headed up the top of the Metropolitan Government Building, which is only a short walk from where I was staying in Shinjuku. It has twin viewing platforms at 202 metres above the ground, and the best thing is that they’re absolutely free. Seeing as every other attraction in Japan requires a mortgage extension before even getting close to it, that was a deal I couldn’t pass up. The view turned out to be pretty bloody good, too.

I’ve got great vision (so what they say about wankin’ ain’t true) and I saw a good sort catching some sun in Yoyogi Park. I figured that, at best, I’d score a root, and, at worst, I’d get to explore a park with a really funny name, so I headed over there. It’s full of trees and is a nice break from the city, but Yoyogi Park is also crawling with people, and I got into trouble for sitting on a rock, so it’s not exactly the greatest place in the world (that would be the space between Shion Fujimoto’s legs). Oh, and when I got down there the ‘good sort’ turned out to be a 90-year-old Japanese dude in his undies. Maybe what they say about wankin’ is true.

Shortly after escaping the park, I was pleased to bump into one of my favourite Japanese pop groups, the Sushi Dolls – BANG! The BANG! bit is part of their name, by the way. I wasn’t saying that I went up and shot them. I had a brief dalliance with the lead singer, Yuki, a number of years ago whilst we were both working as erotic dancers on Pacific cruise. She ended up leaving me for Pablo, a heavily-tattooed South American billionaire with an impressive collection of designer hats, and I was left heart-broken. I waved at Yuki, but she just turned to a large security and five seconds later I was being escorted out of there. Call me, Yuki!

With my arm possibly broken and my nose bleeding, I blindly staggered towards Shibuya, an overwhelming mixing pot of hip teenagers, techno music, never-ending traffic jams, gigantic video screen, lost tourists, and street dancing. The blinding lights and deafening sounds further disoriented me, and I found myself in a dead-end lane, accosted by a street-wise youth gang. They started pushing me around, hassling me in Japanese. I feared for my life, and did the only thing I could think of – I danced. I busted out some really special moves and did a few handstands, and it was obvious that the toughs were very impressed. They started cheering and clapping, and when I finished, covered in sweat, they called me a legend in broken English and offered to buy me lunch. I pointed at Godzilla behind them and got the fuck out of there.

I ran so fast that I made it out to the site of the 1964 Olympics which, unlike Sydney, is actually pretty close to the city. I looked around for the stadium, hoping to get a photo in front of it, but all I could see was some fat bloke in a tractor.
“Hey, Shigeru!” I yelled, taking a swig from my beer. “Where’s the fuckin’ stadium?”
The bloke stopped the tractor and climbed down, throwing his helmet to the dirt. “My name no Shigeru,” he fumed. “My name Ryu, like popular Street Fighter II character.”
“How do you do, Ken?” I asked, but the joke went over his head. “Where’s the bloody stadium at?”
“Up you arse,” he snarled, then spat at me and climbed back into his tractor. Well, that was rude.

Turns out the original stadium got knocked over so that they can build the new one on the same spot. Well, they could’ve told me that before I travelled 10,000 kilometres to see the bloody thing. I’ll be writing a very strongly-worded email to the boss of the Nipponese Tourism Council. Prepare yourself for that, Gilbert Yamanoke!

The sun goes down quicker than any of my last six girlfriends in Tokyo, and by five in the arvo the sky was dark and the streets were ablaze with neon. I wandered into the streets of Shinjuku, swept along by the tidal wave of people, accosted by dozens of Nigerian touts, assaulted by sights and sounds that can’t be seen or heard anywhere else. Tokyo really is as over-the-top as it seems in movies, and Shinjuku seems more like a carnival funhouse than a place that could actually exist in the real world. It’s insane.

I bumped into a couple of Aussie blokes and we got smashed on Chu-hai in the streets, played baseball, escaped from brothels, sang kareoke and tried to pick up women. Then it got weird and violent and scary. It was a night that left two men stuck in a Japanese prison for the next three months, and me wondering whether I’d be able to go home. But that’s a story for another time. Trust me, I’ll tell it.