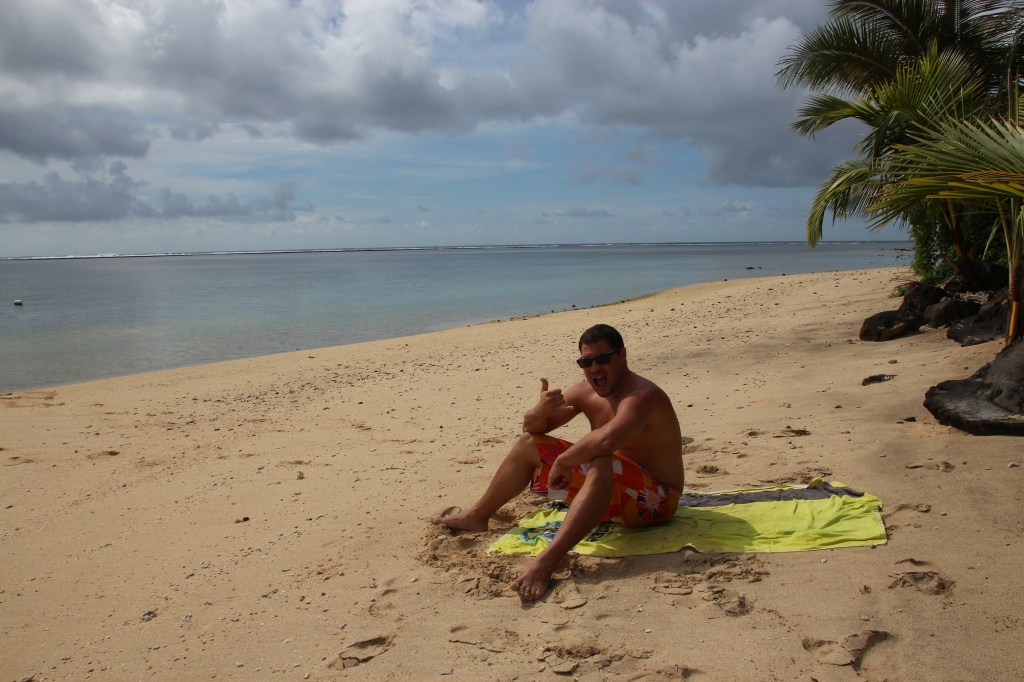 I wanted to do something for the first time and, since that chick from The Big Bang Theory hasn’t be answering my emails, I decided on scuba diving. A happy-go-lucky Austrian named Olaf, from Dive Savai’i, picked me up at 8am, and in no time I was being strapped to a scuba tank.

After a short practice run in shallow water, we scrambled into a boat and headed a few kilometres into the crystal clear water, before dropping anchor. It was beautiful out there, with the emerald mountains looming large over the azure ocean. A few minutes later I flopped off the boat, put my mouthpiece in place and started making the long descent underwater.

It was freaky at first, and my instincts told me to swim back to the safety of the surface. But I kept swimming down into the blue, towards swarms of colourful fish, and after a few minutes I wasn’t even thinking about my breathing anymore. An intense feeling of freedom washed over me as I swam this way and that, chasing fish and gazing in wonder at the beautiful coral. I zoomed through a cave and came face-to-face with a giant sea turtle. It was utterly brilliant.

That first dive lasted an hour but really, time didn’t mean anything down there. I just enjoyed the weightlessness, the great view and the serenity. Of course, it didn’t hurt that my instructor was a spunky 18-year-old New Zealander. I thought about showing her my sea cucumber, but decided that being slapped senseless while 12 metres below the surface didn’t sound fun at all.

We eventually resurfaced, and I took a few moments to readjust to life above the waves. Lunch was paw-paw and some sort of weird Samoan donuts, served with good conversation from the diving instructors and the young Kiwi couple who were also out there with us. I tried to put the moves on the Kiwi instructor, but she found my jokes about as funny as a urinary tract infection. And I’m telling ya, urinary tract infections aren’t fun at all.

Our second dive took us down the the wreck of the Juno, a boat that sank back in… some year. I dunno, if you care that much then look it up on the interwebs. It was even better than the first site, with more turtles, fish and bizarre colour-changing coral. I took some time out just to relax at the bottom of the ocean, enjoying the atmosphere.

And before I knew it my day of diving was over, and Olaf was dropping me back at Tanu Beach. After a nice little bludge on the sand, I hopped in the Rav and took off to check out the nearby lava fields. Basically, a volcano erupted back in the early 1900s and the lava wiped out heaps of Savai’i. I stopped off and had a peek at a church that was smashed to bits by the lava, helped all the way by a handsome Samoan lady who must’ve taken a shine to me, bacause she didn’t leave my side for the whole 15 minutes I was there. Must’ve been the fact I hadn’t changed my clothes for four days.

The rest of the day and night was a lazy blur of beer, honey-flavoured chips, great food, Samoan kiddies dancing, and a chat with Henry. Who needs to actually take drugs, when you’ve got Henry? At the end of a night, one of the local ladies asked if I could give her a lift home. I was eight beers in but thought it would be rude to say no, so I picked up my keys and off we went. If I thought driving during the day was tough, the night was even worse. There were pigs, dogs, cows, horses and drunk blokes everywhere, and it took me 20 minutes to make the 2km trip. The fat woman was licking her lips the whole way, and I was nervous – she either wanted to eat me or suck me off, and either way I wasn’t keen on ending up in her mouth.

She told me to pull into a driveway, and a bunch of massive Samoan fellas were standing there grinning.

“Now, I’ll give you payment for the trip, taxi driver,” she said, and the blokes roared with approval. I tried to fight back but was overpowered by the woman, who outweighed me by a good 40kg. She was gunna blow me whether I wanted it or not, and her mates were chanting what I assume is the Samoan equivalent of ‘mouth rape’.

My pants were yanked off and she was moving in for the kill. With tears running down my cheeks, I slammed the Rav into reverse and rolled backwards. It took the woman by surprise, and she was tossed from the passenger seat with a thud. I didn’t stop, burning away into the night while the Samoans chased after me.

I ran over a chicken on the way home, and eventually stepped out of the Rav without my trousers on, then crawled into my fale for a sleep that was prickled by dreams of being sucked off by Fui Fui Moi Moi’s fatter, uglier sister. Inexplicably, I woke up with a boner.

2 thoughts on “Going down in Samoa”