The Soviet Air Force earned a fearsome reputation during the 20th Century, with a combination of technical ingenuity, fearless pilots, and shear numbers leading the USSR to brutal airborne victories in a number of theatres of war. Aircraft such as the MiG-15 and Su-27 have achieved near-mythical status due to their dominance over the opposition, and many wartime pilots remain heroes in their homeland. The Soviet Union might be a thing of the past, but the ghosts of the past live on at the Central Air Force Museum. 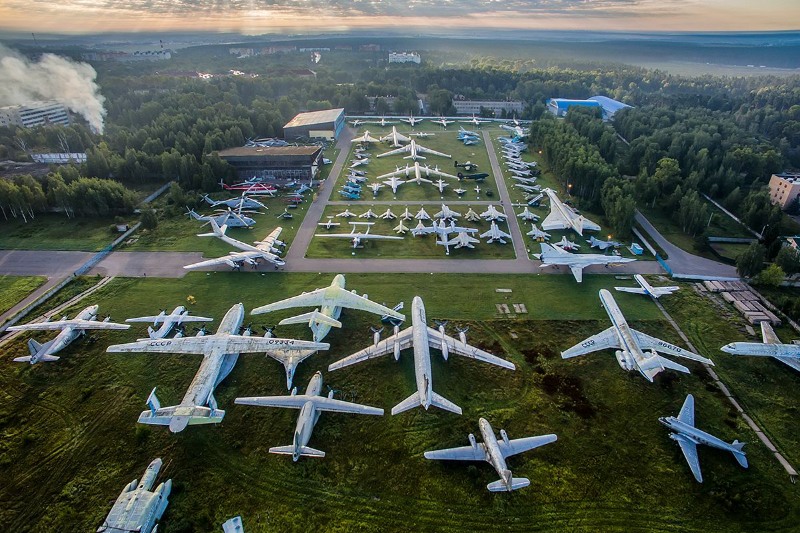 The museum boasts one of the largest collections of aircraft in the world, and by far the biggest number of Soviet-era machines. There are nearly 200 fighter jets, bombers, choppers, cargo carriers and spaceships, including some incredibly rare prototypes, one-offs and curious contraptions. Despite boasting such an outrageous collection, the museum is very much off the beaten track, being located in a grim field in the depressing outer suburbs of Moscow, but I wasn’t going to let that put me off. I jumped on the train to make the 80-minute trip out to Monino, with visions of dog fights spinning through my mind. 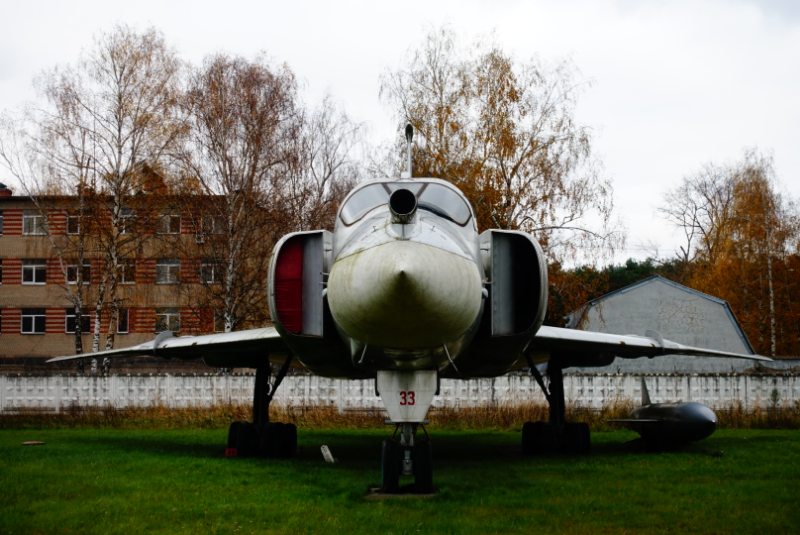 The city of Monino itself looks like a place that time forgot, with decaying residential blocks, burnt-out cars, and all sorts of weirdos shambling around like zombies. Perhaps there was a nuclear meltdown there that I never read about, but I can’t understand why anyone would live in such a dreary place. I mean, there are only so many times you can go to the bloody air museum. It’s a confusing walk through town to find the planes, but follow the awesome directions found here and you should make it without falling into a sinkhole or being attacked by junkies.

If you’ve got even the vaguest interest in things with wings, then the scramble through Shitsville is well worth it. The museum’s first hangar holds lovingly-restored original models of Soviet classics such as the Lavochkin La-7, the Yakoklev Yak-9 and the ancient Polikarpov R-5. Apparently thousands of enemy pilots died just trying to pronounce the names. They look like they could still roll out onto the runway and light up the sky, and it’s truly thrilling to be able to get so close to such legendary planes. Surprisingly, the signs that accompany each aircraft have plenty of information in English, so it’s easy to find out how much carnage each machine created.

The hangar is fascinating, but it’s the open field down the road that will leave any aviation or history buff needing to change their trousers. In a windswept corner of Monina lie more than 170 of the greatest planes to ever take to the skies, with everything from a 114 tonne Antonov An-22 to a tiny MiG-105 Spiral EPOS Spaceplane just sitting there waiting to be gawped at. Some are in fantastic condition, some are falling apart after years of exposure to the harsh Russian climate, but every single aircraft there has a story to tell. The effect of seeing so many legendary planes together is quite overwhelming.

Highlights for me included the massive Mil Mi-12 helicopter, which looms large over the entrance to the field; the Concorde-like Tupolev Tu-144 supersonic airliner, which looks like a prop from a 1980s sci-fi movie; and the Sukhoi T-4 high-speed bomber prototype, which is the only of its type (for good reason – it was rubbish and could barely stay in the sky). It would be possible to spend a whole day exploring the airfield, marvelling at retired legends and discovering lost curiosities, but it was about one degree and I was losing feeling in my photo-taking finger, so I headed into the colossal blue hangar at the back of the site, where more wonders were waiting for me. 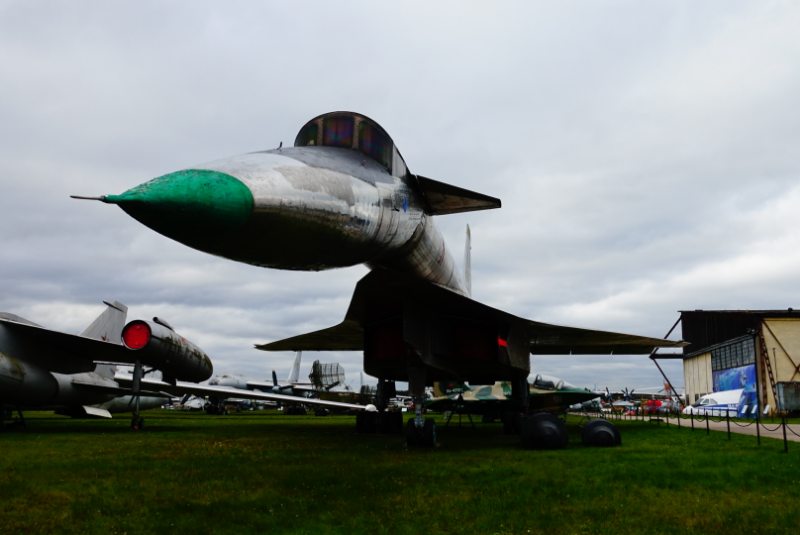 One of the most incredible contraptions I saw there wasn’t a plane at all, but an astonishing space balloon. Back in 1962 two Russian fellas, E. Andreev and P. Dolgov, climbed into the ricketty old thing and floated to a height of 25,600m above the Earth. That sounds terrifying enough, but when they reached that height they opened the door and jumped out. E broke the world record for the heighest free fall, and I guess P did too – but there was a problem with the pressurisation of his suit and HIS HEAD EXPLODED.

The Central Air Force Museum is utterly fascinating and fun for the whole family. It feels like climbing into a time machine and journeying back to the days when tensions were high between the USA and the USSR, and the end of the world was only one rash decision away. I’m just glad that we’re good mates with the Russians these days, because that field alone held enough warbirds to blow the piss out of a medium-sized city. 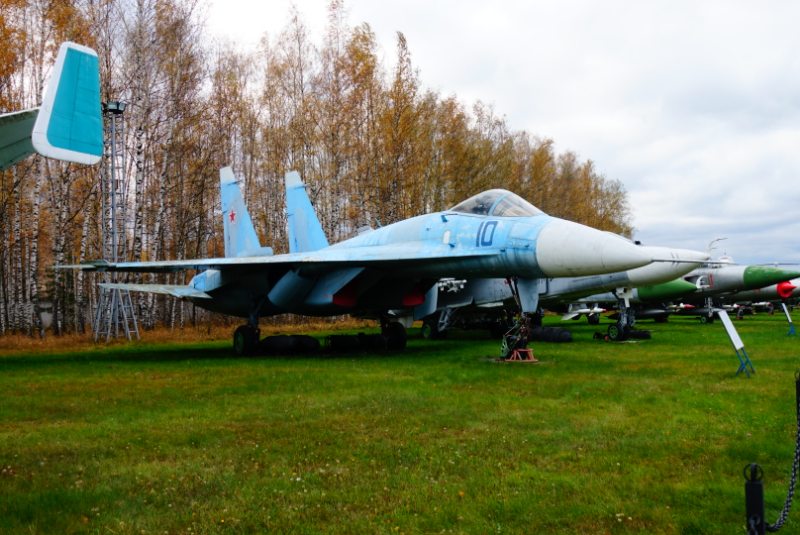 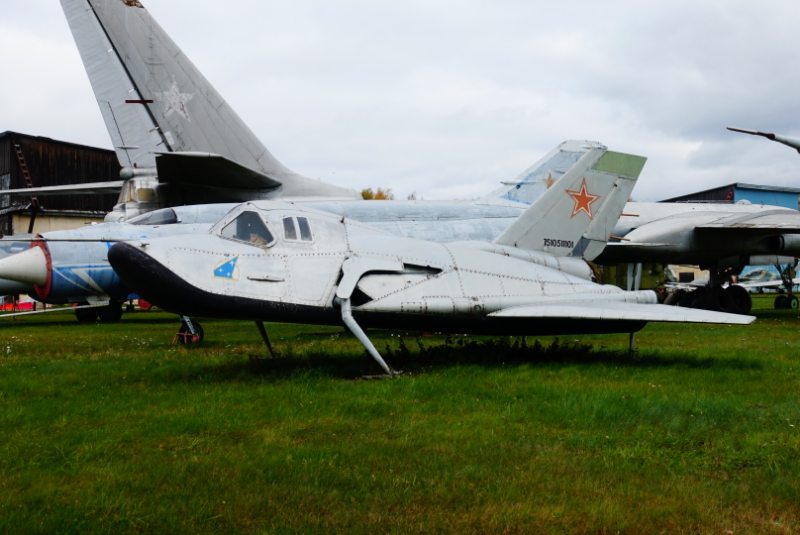 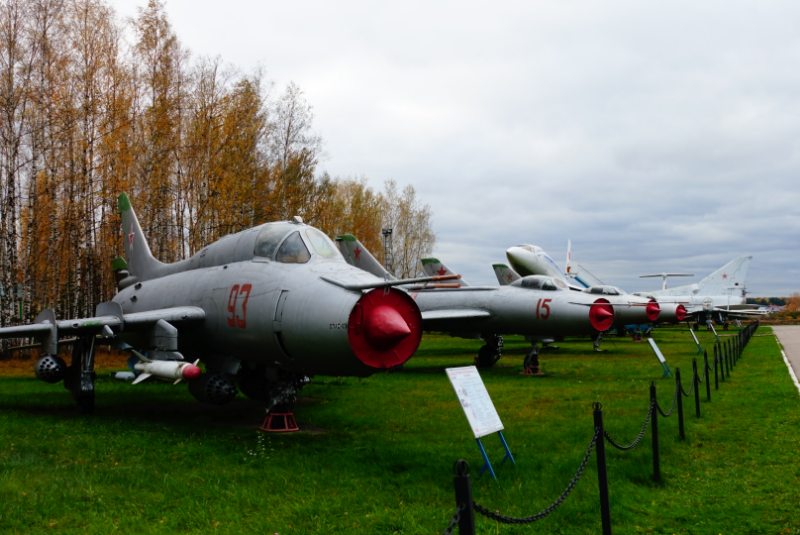 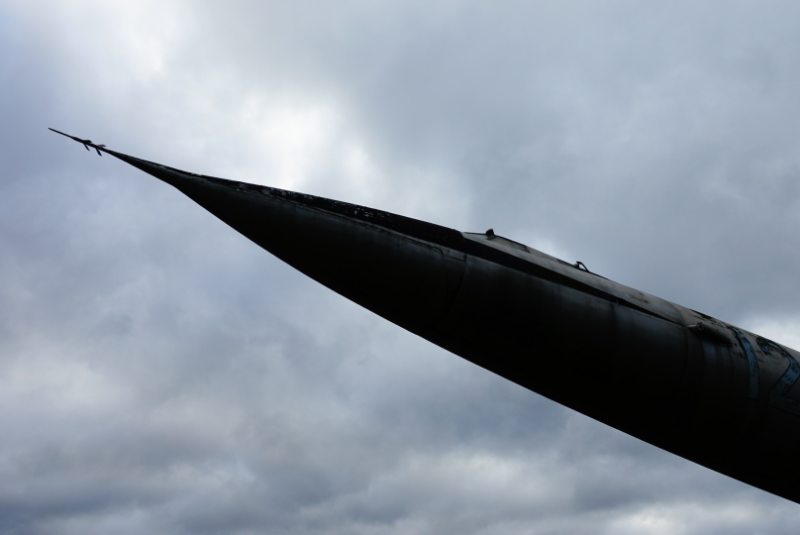 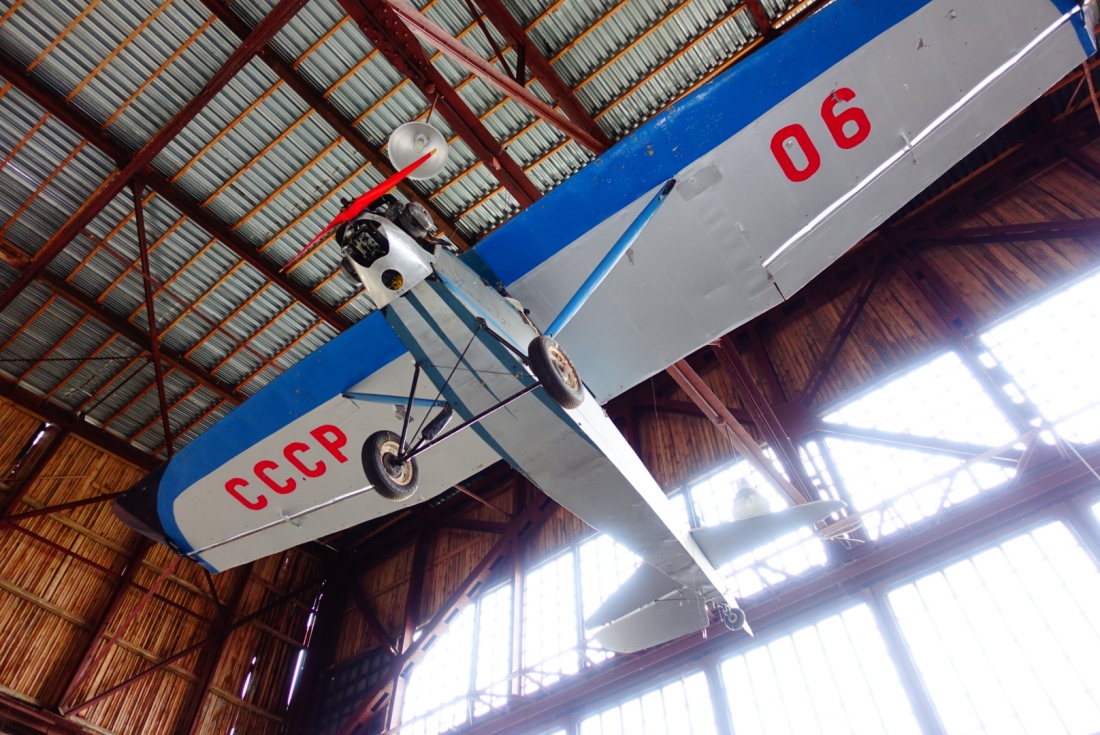 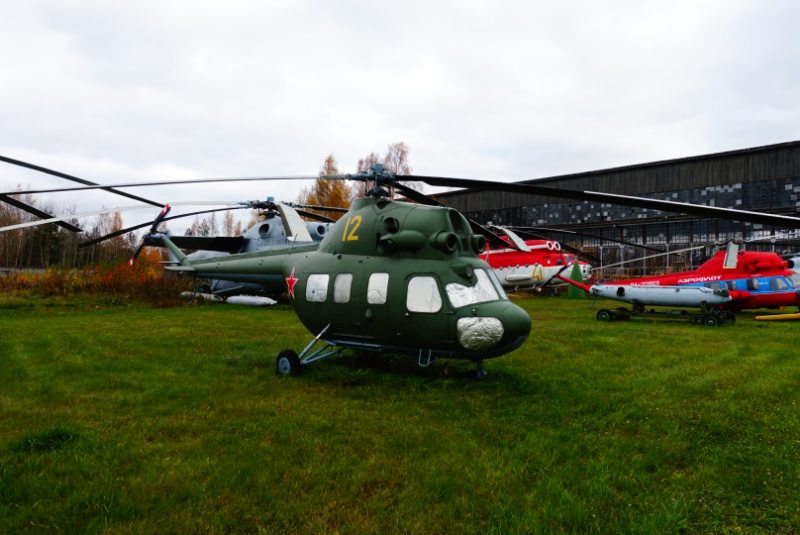 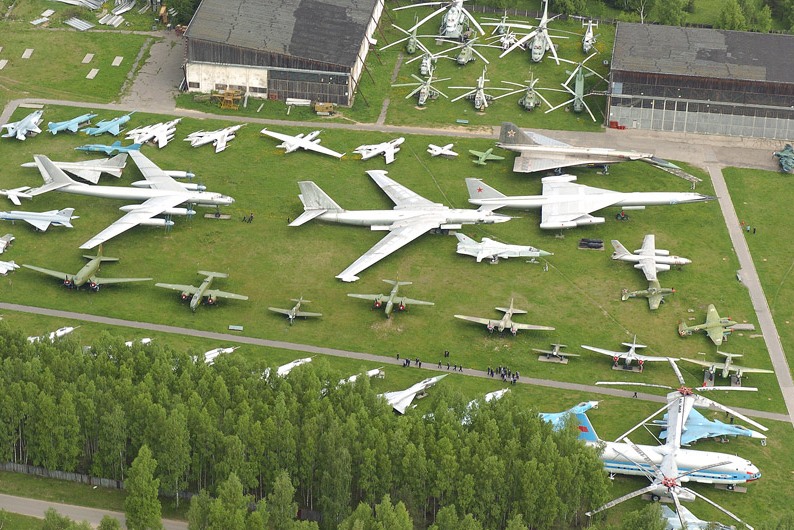 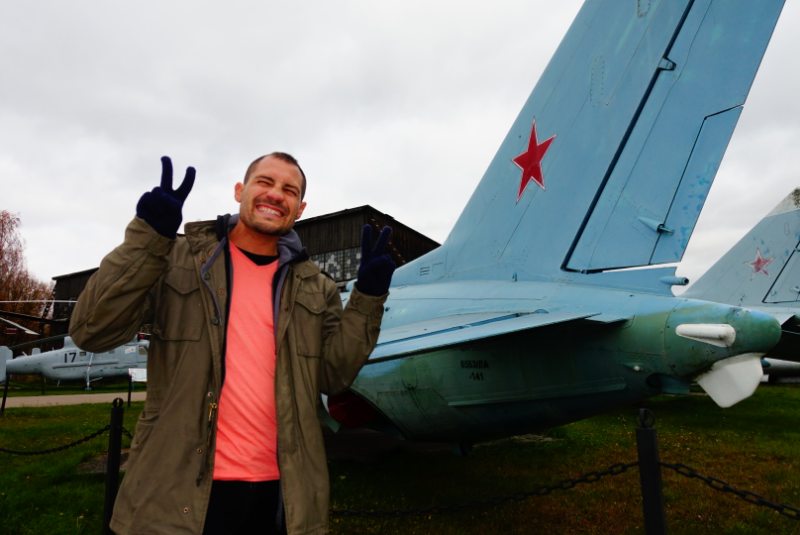 3 thoughts on “Skeletons of the Soviet Air Force”