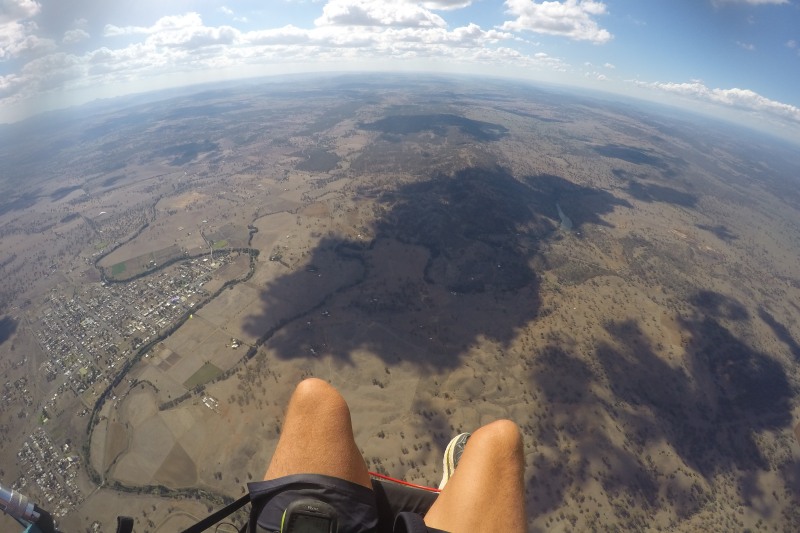 Ask most people about Manilla and they’ll mention streets overflowing with sewage, drug-crazed violence and X-rated ping pong shows. But that’s the Filipino version, and when you mention the name to a paragliding pilot, they’re more likely to talk about epic thermals, heart-stopping collapses and vast distances covered while strapped to a glorified Coles shopping bag. I headed out there for the recent State of Origin comp, and it was ace.

For a village of 2300 people that’s right out in the middle of fucking nowhere, Manilla is actually a really nice place. There’s a pretty river, good restaurants and an awesome pub run by Uncle Tommy, who’s a deadset legend. The beer’s cold, the schnitzels are fatter than Rebel Wilson’s arse, and there’s usually a sheila around willing to grab your donk for a bourbon and coke. That first night I got hammered there with Aidan and Matty, a couple of pilots from around my way who prove that not all of the younger generation is adsicted to sending dick pics on their phones and drinking paint for YouTube videos. I think I woke up under a bush.

I was feeling dustier than a wombat’s wang the next morning, but I shook off the fog and headed up the hill to join the competition. Conditions were spectacular and, after almost hitting the deck three minutes after launching, I hooked a thermal up to 2600m and started heading north. With a strong southerly I was scooting along at more than 60km/h and picking up lift the whole day, meaning I made it 50.34km before landing – a new personal best! What an awesome way to spend my birthday! Alright, let’s not mention that the Bombastic Bednal Brothers both bested me.

I hitched a ride back to the Royal, where I smashed beers and met a swagman who told me he’d once eaten the barman’s pet turtle. I don’t know if he lost a bet or was just hungry, but he seemed pretty pleased with himself. Ah, Manilla is full of characters, which is one reason I love the bush. People rarely acknowledge each other in the cities, but in out-of-the-way places it’s possible to meet a truly facinating person every day of the week. As the sun was setting, things took a turn for the truly bizarre when a highly unusual man walked into the pub wearing a dog as a backpack.

When the rest of the gang finally made it back from wherever they’d landed, we hit the sauce hard, celebrating a great day of flying above the beautiful countryside. However, the good mood was soon shattered by a commotion in the beer garden. I raced out there to see a familiar figure brawling with a group of tough-looking locals.

Scotty kicked one in the balls, tipped another into a garbage bin, and bonked the third over the head with a chair. With the hard work done, he wiped the gore from his swollen fists, slicked back his glorious mullet and greeted us with his award-winning smile. After being implicated in a ball-tampering scandal in South Africa (which was made worse by the fact they weren’t his balls), Scotty had been keeping things low-key, but was now ready to show the paragliding world what he was made of.

“The trophy is mine,” he sneered, swaggering over to a young lady and pinching her on the bottom. “You chumps might as well go home, play with your Barbie doll. Tomorrow I fly 1000 kilometre. Maybe I land on the moon. It depend what I feel like.”

Unfortunately for Scott, the trophy wasn’t to be his. Later that night he was shot whilst attempting to steal tomato sauce sachets from the local takeaway shop and was unable to compete due to massive blood loss. The rest of us had a great day, flying west in bumpy conditions, with Matt and Aiden smashing their personal bests (and well and truly outflying me), whilst some other pilots pushed out towards Narabri. I landed next to some sort of dorky-looking horse thing.

The first two days were good, but it was the third day that separated the priests from the boys (or however that saying goes). The conditions were difficult, with weak thermals and a tough launch, and I again found myself heading for the bombout within minutes. I was only metres from the ground when I finally found some lifty air and climbed up to 2000 metres. That was enough for me to get going, and I spent the next three hours scratching away for any height I could get, and slowly crabbing north. By the time I made it to Barraba some of the boys were already pissed at the local bowlo, so I prepared to land and get on the cans. But a rogue thermal carried me away, and I ended up landing 48km from launch – putting me in the top 10 for the day. Best of all, the rest of the boys did so well that we ended up finishing fifth out of, I dunno, let’s say 1000 teams. And let’s not mention that Aido and Matt’s team beat us.

I touched down next to a bull who looked like he either wanted to fight me or fuck me, so I bundled up and jumped over a barbed wire fence. Once back at the bowlo, I proceeded to get epically smashed, and we all ended up back at Tom’s that night for bulk drinks. I was stoked with my performance – 120km over three days was more than I could’ve hoped for – and happy to have spent a long weekend with some great people. The next morning I jumped back in my glider and launched from Mount Borah one more time. I went up and up and up, before heading east. Over the mountains, over the beaches, over the oceans, until I landed somewhere very interesting indeed…