I’ve fallen in love with a lot of places around the world, but nowhere has captured my heart quite like Carcassonne. This little village in the south-west of France has it all – centuries of history, an impressive citadel, beautiful parks and, most importantly, a proud history of rugby league. I spent a single day in this wonderful place two years ago, and the memories will stay with me forever.

I was nearing the end of my trip through western Europe, and had spent weeks on end in major cities, so when I made it to the south of France I headed straight to a peculiar little village in the glorious Aude department. The train system makes travel easy, and the trip into Carcassonne is a joy, watching hills and lakes and forests roll by. And when we pulled into the village, I knew I was in for something special, as I looked over the River Aude to see a medieval castle perched on top of a hill. It was my ultimate destination, but I had somewhere else to go first. 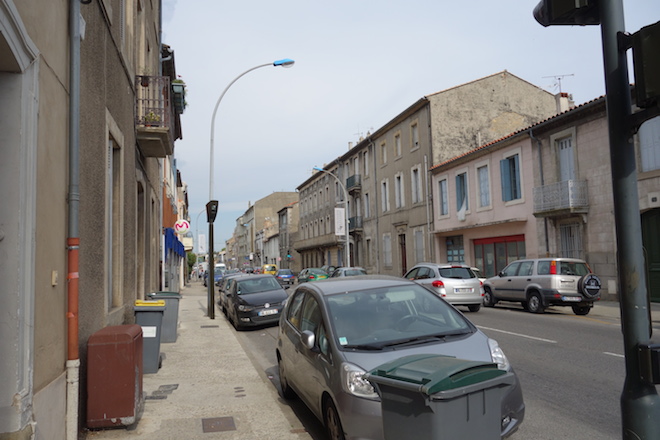 Carcassonne is a centre for rugby league in France. It’s the home of AS Carcassonne XIII, who play in the Elite One Championship, and the birthplace of France’s greatest-ever player, the legendary Puig Aubert. Stade Albert Domec lies close to the centre of this serene and picturesque town, so I headed over there to soak in some sporting history.

And I saw some really nice things. Seriously, you couldn’t swing a baguette in Carcassonne without hitting something that deserves to be on a postcard.

Rugby league has a proud and tragic past in France. Introduced to the country in the 1930s, it exploded in popularity and soon rivaled the established rugby union for a place in the hearts and minds of those in the south of France. Then the war broke out, and the bastards at the rugby union assisted the Vichy regime in return for one thing – the banning of rugby league.

Rugby league was stripped of its assets, grounds, players, and even its name – until recently it was only allowed to call itself by the generic name of XIII. After the war, it saw a brief explosion of popularity but, with no money or grounds of their own to play on, it inevitably fell away while union – funded by assets illegally obtained from league – prospered. That’s a very brief summation of what happened, but it highlights why it’s so important that a place like Carcassonne still stands as a home of rugby league.

Stade Albert Domec is very pretty, and would be a wonderful place to watch a game of footy. It’s hosted World Cup matches, French grand finals, and even saw France defeat the all-conquering Aussies back in 1978. When I sat in the stands, with a few people jogging around the oval below me, I could close my eyes and imagine the atmosphere and emotion of those games.

Outside the ground is a statue of French fullback Puig Aubert. ‘Pipette’ is one of the greatest figures in the history of rugby league – he led his country to the inaugural World Cup Final, captained the French to a series win against Australia in 1951, and was inducted into the Rugby League Hall of Fame. He was even awarded his country’s Champion of Champions title – the first time a footballer from any code had been so honoured.

Puig led Les Chanticleers through a period of unprecedented success, where the bruised and bullied the Aussies and the Poms, and marched down streets waving trophies while tens of thousands cheered them on. 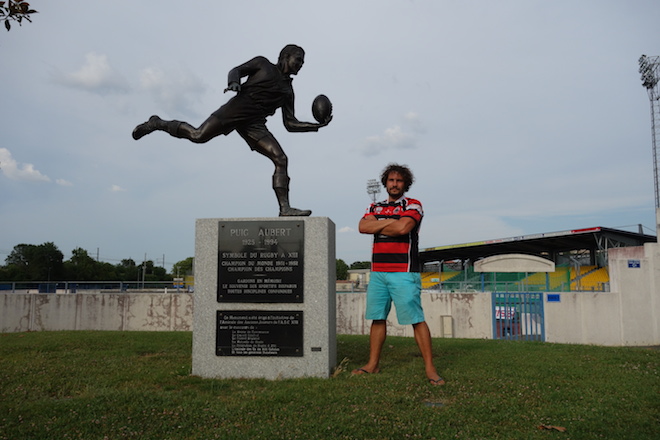 But that’s not the best bit. Puig was, well, unusual. He was known to drink a glass of red wine at half-time, refused to tackle opposition players if he felt his teammates hadn’t put in the effort to do so, smoked on the field, and would present his opponents with notes of apology after scoring against them. In short, he’s a bloody legend.

With my taste for footy history satiated, I turned my sights to the Cité de Carcassonne, the ancient citadel that the modern town is wrapped around. It was built by the Romans way back in the third century, and remains just as impressive today. I was there mid-week and there weren’t many other people around, so as I skipped the hill and then walked in through the gates, I was able to completely lose myself within its historic walls.

I could feel the history living inside the inticately-carved archways and beautiful walls. It’s a magical place, and not just for history buffs – if you don’t fall in love with Carcassonne within minutes of arriving, you’ve got rocks in your head.

I climbed up walls and sat atop turrets, enjoying the peace and the lovely views over Carcassonne. It’s a small place and everything is within walking distance, so I was able to trace my trail from the train station, through the cramped streets of the town centre, past the bubbling river, to the stadium, and finally up to the citadel.

As the shadows lengthened, I spent hours just sitting there and enjoying the world. It’s such a special place that is one of the most wonderful spots you’ll ever see. As the sun sank beneath the distant hills, watched in silence by me and the ghosts of the Visigoths and the Saracens and the Crusaders, it was the perfect ending to an amazing day.

One thought on “Carcassonne”