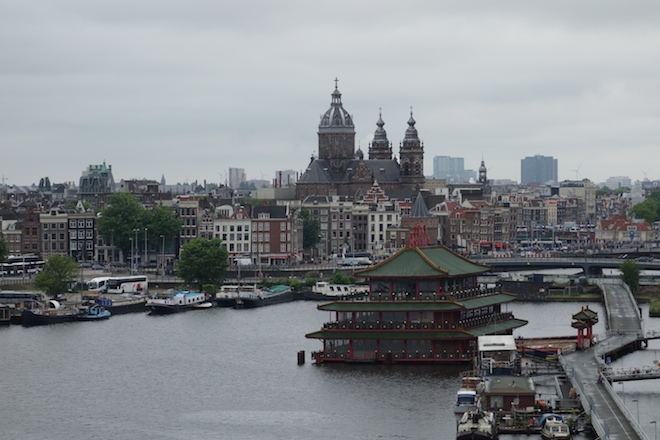 When I rolled into Amsterdam for the first time a few years ago, I only had three things on my mind; beer, drugs, and naked women with big titties. Who cares if it’s one of the most beautiful cities in the world, that’s what me – and most other people – go there for. But first I had something very important to take care of – it was State of Origin day, and I had to find somewhere to watch the big game.

I was staying on a boat moored on the river, so I dumped my bags in my closet of a room and headed out into the freezing afternoon, stopping only to pick up a roadie or two as I waltzed down the streets. Amsterdam might have thousands of years of history and be a melting pot for arts and culture, but I didn’t give a shit about that right then – I had to find a pub with the footy on, and I found it in Coco’s Outback, not far from the city centre.

The joint was jammed wall-to-wall with pissed Aussies, so I grabbed myself a long, tall glass of Grolsch and settled back to watch New South Wales pull out a hard-fought 12-8 victory. As the game wound down I got chatting to Clint, a middle-aged miner from Newcastle, and when the less-than-jovial chaps from Coco’s kicked everyone out of the joint five seconds after the final whistle, we both headed to a local Italian restaurant for another few beers.

That’s when I found out Clint’s a bit fucked in the head.

While I would’ve liked to talk about the footy game, Clint only wanted to talk about his ex-wife. Apparently she was a fucking bitch, a psycho, a slut. I’ve never met the woman, so she probably is, I just wanted Clint to shut the fuck up about it because he was seriously bringing me down. And then he took it a step further.

“Lot of places to bury a body in Australia,” he said, staring me straight in the eyes while taking a deep pull of his Heineken. Shit, now Clint wasn’t just annoying me with his incessant whinging, now the mad bastard was making me an accessory to murder! I needed to get out of there, so I skolled my beer and told him I had to get going.

“Yeah, it’s probably time we left this shithole,” he sneered, looking around. “Let’s head up to the red light district and go halves in a hooker. Whaddya say?”

While the thought of sharing the orifices of an Eastern European sex slave with a deranged murderer certainly sounded appealing, I was forced to decline. Who knows, the nutter probably would’ve strangled the chick while I was balls-deep, and I have no inclination to become a necrophiliac, even if it’s not my fault. Instead, I headed out into Amsterdam by myself, stopping regularly to drink at the endless supply of beautiful pubs.

It’s a gorgeous city, with sparkling canals, fairy tale streets, and ancient churches and monuments. The city centre is small and easy to walk around, and it’s just a great place to spend time. The weather was atrocious when I was there and I was freezing cold as I walked around, but it didn’t matter because Amsterdam has such a special feeling. And then, as I walked along, the ancient buildings gave way to the decadence and depravity of the infamous red light district.

As I stumbled along drunkenly, I realised it was everything I’d ever heard and more. Stunning women with massive fake tits dance behind huge windows, waving to any bloke who looks at them. Gangs of smashed Pommy tourists wobble along cobblestone streets, beers in hand, loudly debating which brothel to head into. Swarms of Japanese tourists, following a leader with a flag and a colour-coded hat, syphon into X-rated sex shows. It’s bizarre and awesome and disgusting at the same time, and definitely worth experiencing.

After checking out a sex show featuring a barely-legal blonde teenager getting fucked by a black fella with a cock the size of a Chinaman’s leg (I bet she was walking funny after that), I decided it was time to indulge in Amsterdam’s other famous commodity – the drugs. Now, I don’t ever use drugs, but felt I had to in order to get the whole cultural experience, so I didn’t really know how to go about it. All the cafes had menus with various drug-sounding items on them, but I couldn’t work out what was what, so I just kept wandering around and drinking. Finally, I walked into a shady-looking cafe, saw some muffins on the counter, and asked what they were. When a creepy bald man told me they were space cakes, I told him to wrap one up for me, and away I went. Big fucking mistake.

I ate the huge muffin an a few bites and chucked the wrapper in a bin, wondering why the effects hadn’t kicked in. Thinking I must’ve been dudded, I ducked into a pub and ordered a beer, grooving around in time to the live band that was playing. I was putting the moves on a big-titted brunette when the music started to echo and the lights around me started to blur. My mind became clouded and I suddenly had to get out of the stuffy pub, so I left my beer (and the big-titted brunette) and burst out into the crisp night air. Sounds hung in the air like butterflies and lights burned intensely as I made my way over to the bank of a canal, holding onto a railing as I watched throngs of people walking by. And then everything changed.

At once, every single person in the crowd transformed into grotesque cartoon characters, with oversized, pointy heads like the crows in Fritz the Cat. Hundreds of the things stared straight at me, their massive eyes burning through me. As the filed past, every person said my name – it was all anyone could say, their voices deep and dropping with evil. I just stood there, freaked out but, deep in my mind, aware that nothing I was seeing was real. I also knew that I had to get out of there.

As I walked down the dark streets, trying to avoid the crows, I was hit by alternating waves of euphoria and terror. One second a pulse would hit me and the world would be bursting with colour and love, and seconds later I would be hit again and I’d be walking through a rotting cesspit with corpses staring at me. It was incredibly strange, and I was very glad to get back to my tiny room on the boat.

Only it wasn’t so tiny, and it wasn’t on a boat. After closing the door, the room magically transformed into my grandparents’ backyard, with an endless blue sky opening up above. I could feel the grass and smell the flowers. I lay back and stretched out, listening to a light breeze rustle through the trees, and gold fish swimming in the pond. I’d found out less than a week beforehand that my grandfather had died while I was flying over from Australia and, while neither he nor my grandmother were in the garden with me, it was a lovely and peaceful way to spend the night.

And bloody hell, I certainly got my money’s worth on that room booking!