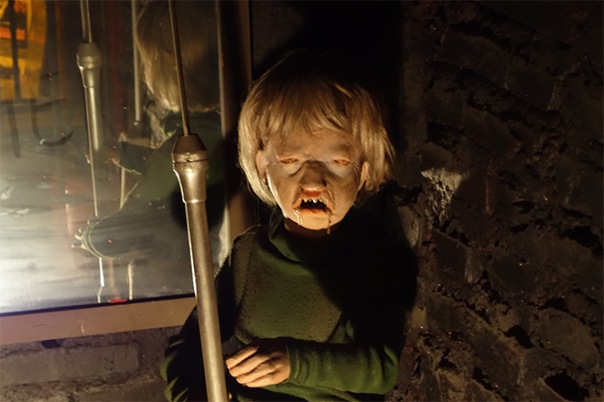 I grew up with a deep love of horror movies. Return of the Living Dead, Friday the 13th, The Texas Chain Saw Massacre and Day of the Dead were always spinning around the family VCR, and I couldn’t get enough of anything involving zombies, ghosts, or demented serial killers.

But above them all, one movie stands out; Lamberto Bava’s 1985 fright classic Demoni. As well as being a true masterpiece of European cinema (horror or otherwise), I’ll always remember it because it was the first R-rated movie I ever watched. I like to tease my mum and say she let me watch it when I was five, but I was probably closer to 10, and I adored it. And what’s not to love? There are grotesque transformations, hookers getting eaten alive, drug abuse, nudity, a sass-mouthed black pimp, an awesome scene with a bloke riding around on a motorbike decapitating zombies with a sword, and a soundtrack featuring Mötley Crüe, Saxon, Rick Springfield and Billy fuckin’ Idol.

That film kicked off my love affair with the film’s producer and writer Dario Argento (I could’ve phrased that better so, just to be sure, I didn’t have sex with Dario when I was 10 – I just really liked his movies). A true auter, Dario has created some of the moodiest and most original horror flicks of all time, such as Deep Red, Tenebre and the legendary Suspiria.

When I found myself in Rome a year or so ago, there was one place that I really, really wanted to go to. It wasn’t the Coliseum (although it was brilliant) and it wasn’t the toilet after one too many Peronis (although that was brilliant, too). It was Profondo Rosso, the Dario Argento museum, and it turned out to be one of the best things I saw during my journey across Europe.

Located in an unassuming building in a quiet street as short stroll north-east of the Vatican City, Profondo Rosso (named after Dario’s 1975 film) has two parts; as you walk in, there’s a shop full of monster costumes, books, action figures, magic tricks, gags, masks, old movies on both VHS and DVD, and all sorts of other bits and pieces of variable quality. It’s a fun place for horror fans to check out, but the true magic is in the basement.

After paying 5 Euros to a handsome bald man, I descended a tight staircase and made my way into what can only be called a series of ancient catacombs, which were probably built thousands of years ago for reasons I don’t understand. Not only was I stepping back in time, I was walking into a nightmarish world of deformed creatures and grueling terror. A visit the Dario Argento museum is truly to journey into the mind of a madman.

The museum feels more like a dungeon, with a lonely and strangely-lit corridor leading off into the darkness, with caged vaults looming from either side. As I stepped tentatively into this bizarre world, a creepy voice echoed throughout the chamber, providing details (in English!) about the atrocities that were to come.

While the creepy, synth-heavy music of Goblin echoed through the claustrophobic tunnels, I came face-to-face with some of the gruesome critters from Dario’s movies. The deformed child from Phenomena, a sacrificed body from The Church, a disemboweled corpse from Two Evil Eyes. They weren’t moving, but the place was so eerie and they were so lifelike (well, if re-animated corpses can be lifelike) that I didn’t want to turn my back on them.

My paranoia was fueled further by the fact I was heavily hungover after a big night out. My mushy brain had me jumping at shadows, and I was fanging for a beer to settle my nerves.

And then, in a dank corner, I saw it. One of the props from Demoni – a possessed woman with wild hair and razor-sharp teeth, reaching out to devour me (sounds like my ex-girlfriend). It had been 20 years since I’d first seen her, while sitting on a lounge 17,000km away, and it was strange to be looking straight into her unseeing eyes. After a while, time seemed meaningless and I truly felt that I was in another world – one where death lurks around every corner.

I must’ve been down there for a while, because the handsome man inched his way down the stairs and called out to me. Maybe he thought I was wanking down there… but maybe, just maybe, he thought something blank of eye and sharp of tooth had dragged me off to a sad corner.

It finally came time for me to return to the real world, and as I climbed back up the twisted staircase, it was as if I was emerging from a dream. A terrifying dream, there’s no doubt about that, but one I’m glad I experienced. The Dario Argento museum is one of the coolest places I’ve ever visited. The memory of watching Demoni for the first time with stay with me forever, and so will my memories of this wicked museum.

And if you ever do go there, make sure you tell the handsome bloke behind the counter that I wasn’t wanking. I swear I wasn’t!