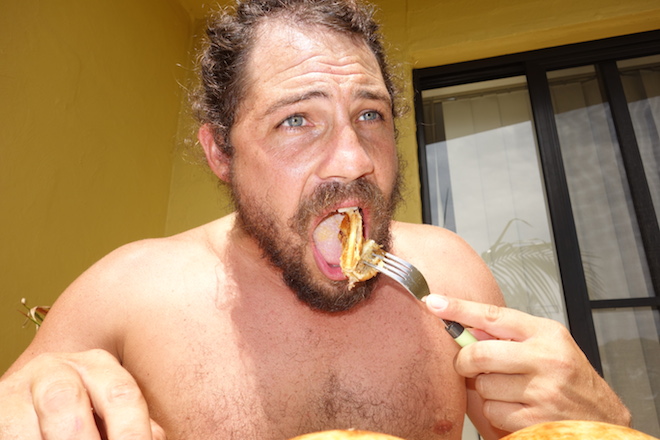 Go fuck yourself, Manu Feildel, and choke on a bucket of cocks, Jamie Oliver, because I’m the best chef in the world now. That’s because I recently cooked the greatest meal of all time, by putting a whole bunch of bite-sized mini meat pies into a full-sized meat pie and cooking the whole thing.

I was sitting around, hungover and hungry, wanting some excitement in my life, when I decided to do something different. After ruling out hitting my cock with a hammer, I decided to create a monstrous meal, the likes of which has never been seen before.

I have a pie cooker, and I love making dog’s eyes full of spaghetti, curry, pizza and other wacky stuff. I was digging through the fridge for something to chuck in there when I came across a long-forgotten packet of Pie Bites, tiny little pies that are a favourite of midgets. The packet had been in there for nearly 18 months and the use-by date was long gone, but nothing was going to stop me from creating history.

I fired up the cooker, lay in the pastry, and then stuffed in as many Pie Bites as possible. I topped it up with gravy, popped another layer of pastry on top and then, laughing maniacally, closed the lid. I sat, barely able to contain my excitement, until the crust was golden brown and the meal of the god’s was ready.

I took it outside, took a deep breath, and prepared to break boundaries and change the way the world works forever. I sliced into the flaky pastry with a sharp knife grasped by an unsteady hand, and the delightful aroma of the pies-in-a-pie enveloped me. I pierced a chunk of the meal with my fork, lifted it to my mouth and popped it in.

The taste was unbelievable – like a pie, but multiplied a thousand fold. It was like eating a pregnant pie full of pie babies, and it gave me a high more intense than any I’d had before (yes, even that time I shot heroin into my doodle in a Bangkok brothel can’t compare). When I finished, I felt as satisfied as a Chinaman with a bellyful of rice, and sat back to contemplate how wonderful the world is.

I highly recommend making your own pies-in-a-pie, but would suggest that you use mini pies that are still within their use-by date, because I ended up shitting myself not long after finishing the meal. Still, it was a small price to pay for immortality.